This is the power of DisplayPort 1.4 with DSC.

ASUS has become the first company to fully adopt the true gaming potential of DisplayPort 1.4, enabling resolutions of 4K at 144Hz with 10-bit colour and HDR enabled thanks to Display Stream Compression (DSC), a standard that has seen pitifully low adoption. Meet ASUS' ROG Swift PG43UQ, a 43.4-inch VA monitor that delivers high refresh rate 4K gaming with no compromises.

This isn't 4K 144Hz in an "overclocked" monitor mode with chroma sub-sampling or some other gimmick; this is the real deal. Sadly, Nvidia graphics cards do not support DisplayPort 1.4 is Display Stream Compression at this time, leaving 4K at 144Hz as an AMD-only feature at this time. The PG43UQ will support variable refresh rates on both AMD and Nvidia graphics cards though VESA's Adaptive-Sync standard, and the screen is reportedly getting Nvidia G-Sync certified.

The ROG Swift PG43UQ is due to be released in the first half of 2020, with Overclockers UK already hosting pre-orders for the display. We have no MSRP for the monitor, but Overclockers currently lists a pre-order price of £1,538.95.

While the ROG Swift PG43UQ currently meets VESA's DisplayHDR 1000 HDR standards, the screen's HDR capabilities are due to be lower than today's OLED and MiniLED screens. Even so, meeting VESA's DisplayHDR standard does require the screen to feature some form of local dimming, and requires the monitor to support over 90% of the DCI-P3 colour space. 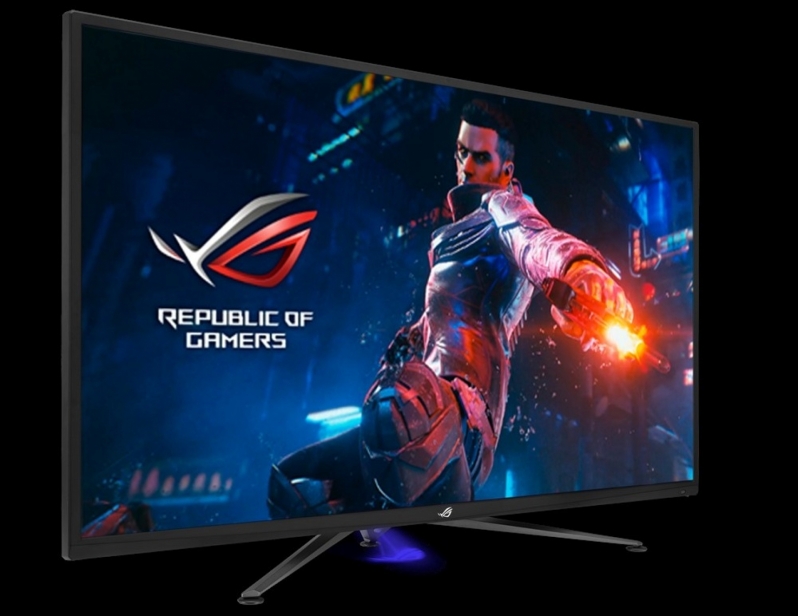 boria0
Far from perfect but good enough. Any chance of a smaller model 32-38 inch?Quote

I really would like to see a comparison of graphic quality between 120hz vs 144hz. Basically no compression vs compression (since DP1.4 can do 120hz without compression of any kind).Quote

The_Governour
This seems nice. Too bad it a bit too big for my monitor taste. 32* would be gold though.Quote