To explain what ELMB-Sync does, we first need to split the technology into its constituent parts, VESA Adaptive-Sync and ELMB (Extreme Low Motion Blur), two techniques that were previously unable to operate concurrently.

VESA Adaptive-Sync enables monitors to vary its refresh rate on the fly within a fixed variable refresh rate range, allowing rendered frames to be displayed at the correct time without tearing or stutter. Extreme Low Motion Blur uses a flickering backlight that inserts a black frame in-between every display refresh to reduce motion blur. This provides users with less visible streaks when fast moving objects are shown, allowing images to appear sharper.

The reason why these technologies don't typically operate at the same time is the fact that ELMB typically operates at a fixed refresh rate, which makes the technology's timings consistent and relatively easy to set up. Adding variable refresh rates into the mix makes things a lot more complex, but ASUS has solved this problem through the assistance of a "dedicated processor" that the company has designed.

Merging Adaptive-Sync and ELMB into a single monitor will enable ASUS to provide gamers with clearer images and the multitude of benefits that are offered by variable refresh rate displays. Hopefully, similar solutions will become available in competing monitors in time, ushering in a new era of variable refresh rate technology. 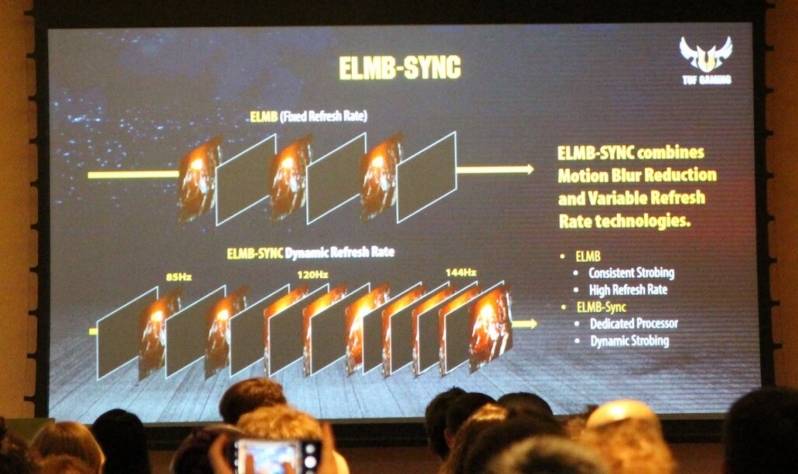 At this time, we have not confirmed the pricing or the release dates of ASUS' new TUF Gaming series of ELMB-Sync enabled monitors, though they are expected to ship later this year.

You can join the discussion on ASUS' TUF Gaming series of ELMC-Sync monitors on the OC3D Forums.