ASUS has just revealed its Radeon RX 6800 XT lineup, showcasing what ROG and TUF teams have been forging to bring the best performance out of AMD's "Big Navi" GPU design an excellent cooling into consumer systems.

To start things off, ASUS has revealed their ROG Strix LC RX 6800 XT, a custom liquid-cooled Big Navi graphics card which is designed to deliver the highest performance levels from AMD's RDNa 2 lineup with customised fans, a 240mm radiator and enough coolant hose to fir the graphics card into EATX systems.

With their ROG Strix LC design, ASUS is giving its users a unique look and the promise of low noise levels. The front of the graphics card is illuminated by addressable RGB LEDs, highlighting the GPU's ROG logo and the graphics card's other design features.

The liquid cooler's large cold plate is designed to cool both the Radeon RX 6800 XT's GPU core and GDDR6 memory modules, addressing most of the graphics card's cooling needs. When necessary, a blower fan on the graphics card will deliver additional airflow to keep the GPU's power circuitry cool under high loads. However, this fan should never need to spin very fast given the lower power usage of these components.

Sadly, ASUS has not revealed the clock speeds and performance levels that this new Radeon RX 6800 XT graphics card will offer, though we can look forward to seeing more of this GPU in the future. 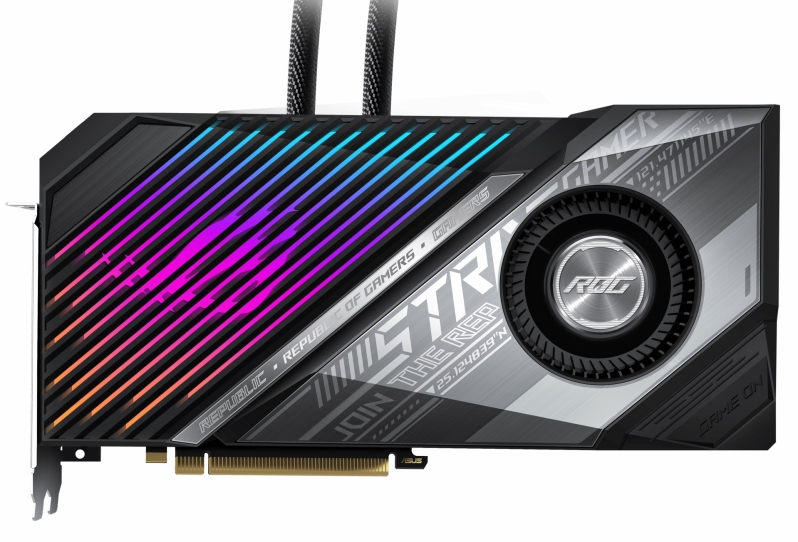 With a massive 2.9 slot cooler, ASUS' ROG Strix RX 6800 XT is a beast, offering ample cooling performance on air with its three fans and the heatsinks' MaxContact baseplate.

Design-wise, this graphics card is very similar to Nvidia's RTX 3080 Strix model, though the design has been optimised for Radeon hardware. Aesthetically, both cards will be almost identical.

Next up we have ASUS' RX 5800 XT TUF Gaming, which will make up the lower-end segment of ASUS' RX 6800 XT lineup, offering users a three-fan heatsink design and will utilise dual 8-pin PCIe power connectors. The graphics card will feature a BIOS switch for a Quiet Mode and a Performance Mode, which can be switched depending on the user's preferences.

Like the ROG Strix model, ASUS says that their new RX 6800 XT and RX 6800 TUF Gaming GPUs will release with 2,9-slot heatsinks and with he company's latest axial fan designs.

ASUS plans to reveal region-specific pricing, clock speeds and other data points about these products in the near future.

You can join the discussion on ASUS' Radeon RX 6800 XT series lineup on the OC3D Forums.

AngryGoldfish
I'm committed to getting a compact GPU this time around, but the TUF is a really good cooler this generation.Quote

AlienALX
That thing ought to clock balls. Awesome ! great for people like me, who love water cooling but would rather have an easier life

Bartacus
I might be in the minority, but I don't think that looks awesome at all. It looks like utter crap with all that awful 'gamer' text smeared all over it. Gross!Quote

AngryGoldfish
Quote:
Oh yeah, I would have thought that was a given.

It's the fact that it should perform really well that has me and others excited.Quote
Reply