How much will custom Vega cost?

ASUS has officially revealed the specs of their upcoming RX Vega 56 Stix OC GPU, showcasing base and boost clock speeds that are much higher than AMD's reference design and around 10% higher framerates in games at 4K

This graphics card comes with the same cooler design as their RX Vega 64 Strix OC, releasing with the same RGB-enabled triple fan cooler, backplate and PCB design. Display-wise this GPU will come with dual HDMI 2.0 outputs as well as two DisplayPort 1.4 connections. In addition to this ASUS also offers a single DVI-D connection for use with older displays, though please note that FreeSync cannot be supported using DVI.

Looking at the base and boost clock speed of this graphics processor we can see increases of around 150MHz and 100MHz respectively, Which should deliver a significant performance boost. The card's HBM2 memory offers the same clock speeds as AMD's reference model, which could be come a limiting factor in memory constrained workloads. These increases in clock speeds should allow the RX Vega 56 Strix to easily outperform AMD's reference model, with ASUS' cooling solution providing lower noise levels when under load thanks to their large cooler design.

In the slide below we can see that ASUS claims that this GPU offers 10% more performance than AMD's reference RX Vega 56 design when playing games at 4K. Using ASUS GPU Tweak II users can set this card to OC mode, Gaming mode and Silent mode, each of which offers a unique balance between performance and noise output. GPU Tweak II can also be used to manually overclock AMD's RX Vega 56. 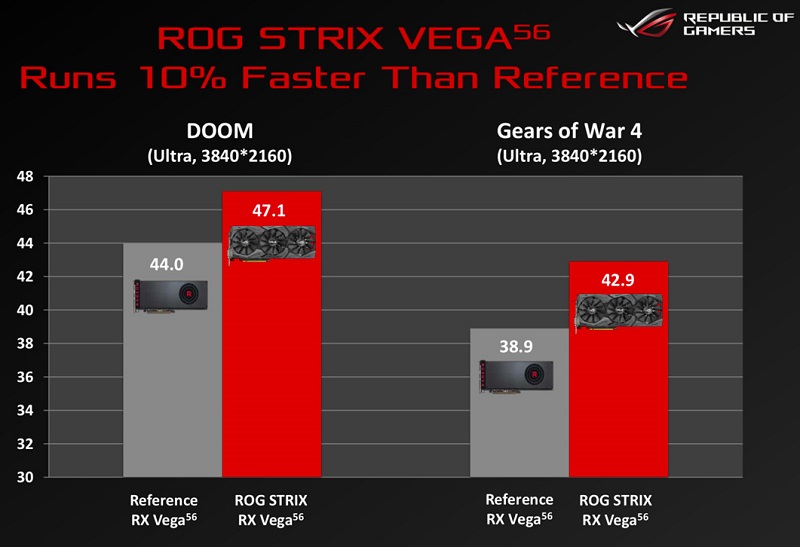 You can join the discussion on ASUS' RX Vega 56 Strix OC GPU on the OC3D Forums.