ASUS has released a new low-cost version of Nvidia's high-bandwidth SLI bridge, which will be available standalone and bundled with some future enthusiast motherboards.
This new SLI bridge is a no-frills version of their enthusiast ROG HB SLI bridge, lacking an ROG-themed cover and LED illumination. ASUS' low-cost SLI bridge will have a basic fibreglass PCB with a basic 60mm/two-slot spacing, which has a one-slot gap between two dual-slot GPUs.
Branding wise this SLI Bridge has a Nvidia SLI logo and a white ROG logo, though I imagine that users could create their own 3D-Printed SLI Bridge cover if they wished. 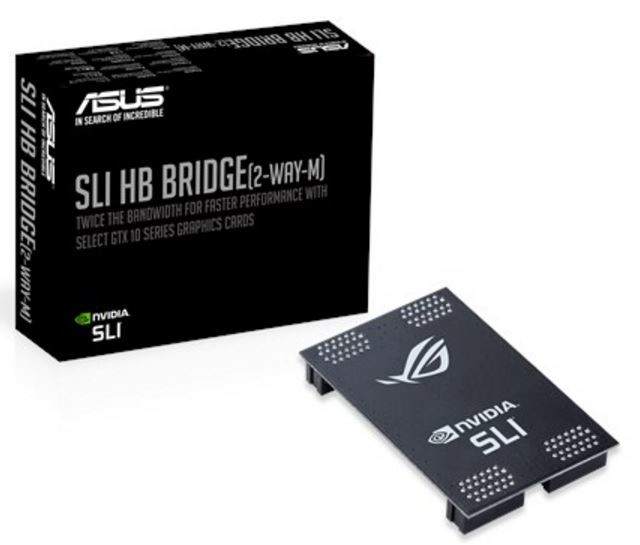 This SLI Bridge will be available standalone at a price which will be a mere fraction of their enthusiast-grade LED illuminated ROG HB SLI Bridge, with this bridge also coming with some future motherboards.

You can join the discussion on ASUS' low-cost HB SLI Bridge on the OC3D Forums.

SuB
I notice the traces are still not shown.. or are deliberately obfuscated.. I'd love to know if these actually are just.. 2 SLI bridges.. because that's exactly what it looks like. Just seems no-one wants to actually admit it because it's a new pricey product..Quote

jimma47
I'd be keen depending on the price. Whilst the HB will do nothing for my 980's performance the colour scheme is spot on

Warchild
I wouldnt buy it. Just seeing that garish ROG logo puts me off things these days. I'm in love with Nvidias own version, would just need some recolouring

jimma47
Quote:
Anything would be better than the brown ribbon i'm currently using

Dicehunter
Quote:
I'll try and find the video but someone did a test showing there was a few percent difference between standard SLI bridges and the newer version, Although the difference is nothing to write home about.Quote
Reply