Is this what the next generation of GPUs will look like?

It looks like ASUS' Republic of Games (ROG) division is ready for the next generation of RTX graphics cards with Videocardz publishing what it believes to be the first image of the company's ROG RTX 3080 Ti Strix.

Is the image below is legitimate, ASUS plans to change the look of its high-end ROG Strix graphics card lineup radically. This redesign includes changes the company's RGB lighting implementation, adding more metallic elements to its heatsink shroud while also making alterations to their heatsink and fan designs.

The image below showcases an RTX 3080 Ti graphics card, suggesting that Nvidia plans to stick to its usual naming scheme for Geforce products, where an XX80 Ti acts as the company's flagship. This naming suggests that recent RTX 3090 rumours are illegitimate, though it is equally possible that ASUS' new RTX cooler design is a placeholder design and is unfinalised.

Nvidia's next generation of graphics cards will be based on the company's Ampere architecture. It is also likely that Ampere will shift Nvidia's graphics cards to TSMC's 7nm process tech, which itself promises a significant performance and density leap over the 12nm node that Turing uses. With Ampere promising a major node transition and new architectural enhancements, Nvidia's next-generation GPU lineup promises to be a strong one. 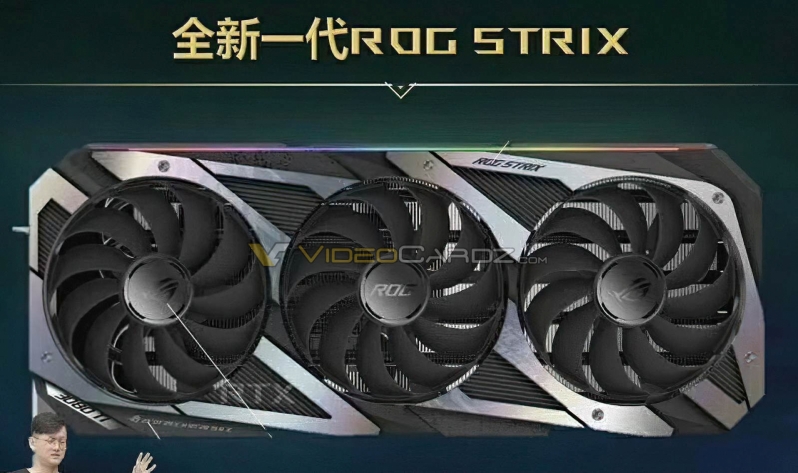 Below we have included an image of ASUS' ROG RTX 2080 Ti Strix for comparison purposes.

You can join the discussion on ASUS' alleged ROG Strix RTX 3080 Ti heatsink design on the OC3D Forums.

Warchild
I get more of an MSI gaming X trio feel looking at this one.Quote
Reply