Nvidia's GTX 1660 Ti is rumoured to launch within the next few weeks, but new listings from the Eurasian Economic Commission (EEC) website have revealed that both 6GB and 3GB versions of the graphics card will be offered.

The listing, which is pictured below, reveals a number of ASUS GTX 1660 Ti models, including Dual, Expedition, Phoenix, TUF and Turbo variants, as well as their flagship ROG Strix offerings. If the listing below is correct, it appears as if there will be no 3GB ROG Strix GTX 1660 Ti.

If we're honest, 3GB of VRAM isn't that much. In our Metro Exodus PC Performance Review, we found that older 2GB graphics cards struggled to play the title. With modern consoles featuring 8GB, or 12GB in the case of the Xbox One X, it is common to see multiplatform games that are designed with 3GB or 4GB of VRAM in mind, a situation that is quickly making 2GB graphics card irrelevant for 1080p gaming. Today, we feel that 3GB is the minimum that PC gamers should expect on a "gaming" graphics card, at least outside of the ultra-low-end market.

If today's GTX 1660 Ti specifications leaks are correct, the graphics card will be a mid-range product which replaces the GTX 1060 (6GB). In this position in the market, we feel that 3GB is a hard sell, just like it was with the GTX 1060 3GB. Plenty of games these days use between 3-4GB of VRAM at 1080p, making a 3GB total graphics card a hard sell, making us wonder why Nvidia is releasing this SKU. Perhaps this 3GB product is only for selected markets, but we can see why ASUS would be unwilling to add a 3GB GTX 1660 Ti to its ROG product lineup. 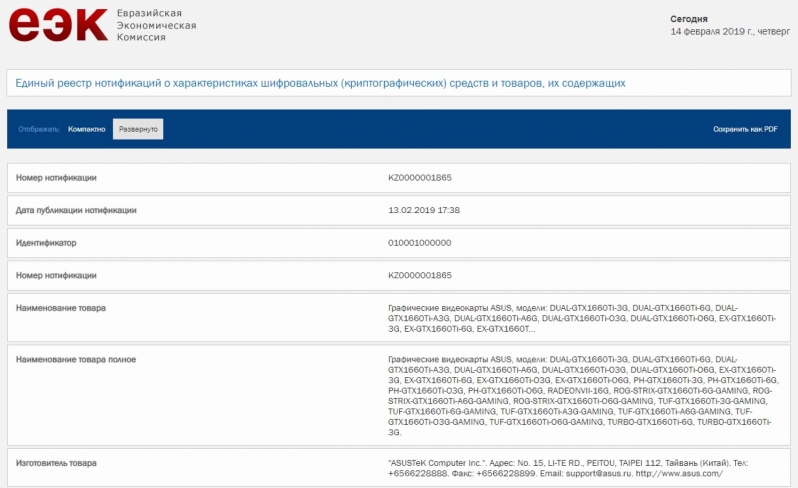 You can join the discussion on ASUS planned GTX 1660 Ti 3GB models on the OC3D Forums.

tgrech
I still use a 2GB card for gaming (HD7870XT) and I have found in the few more modern tittles I play, like Forza, it can start to cause mad stuttering and stuff after a point, to a degree where now I sometimes have to turn the render resolution down from 1080p. I guess if all you play are DX9 kinda titles though, maybe some esports games and stuff, MOBAs, CSGO and such, or I guess even well optimised titles like GTAV, you won't have an issue, but yeah you'd have to give a lot of consideration about what games you play buying a card like that today.Quote

WYP
Quote:
Exactly, I have seen similar issues in Forza and a lot of other recent releases. 2GB cards are starting to struggle.

TBH I think 3GB cards will be running into issues before too long, especially as next-gen consoles get closer. I see 3GB cards having a shorter overall lifespan than their 4GB or 6GB equivalents.Quote

AlienALX
Quote:
If you run out of VRAM it uses the paging file on your hard drive fella. Hence the stuttering.

But yes, like global warming VRAM issues are definitely real.Quote

tgrech
Nowadays if you have enough of it it will just revert to system memory and most games will use system memory access over PCIe for textures and stuff alongside video memory but yeah that's still a massive slow down, especially with those HBM cards or over my PCIe x1 expresscard link.Quote
Reply