What's It All About?

To cool with air or to cool with water? It's an eternal conundrum and one made even more complicated by the current swathe of air-cooling options with good performance. If you plan to air cool then it's worth spending the extra money on a high-end air-cooled card with all the bells and whistles. However, if later on you decide you want to water-cool it you can be left with a very expensive cooler in a box, another very expensive water block to purchase, and the sphincter clenching task of removing the old cooler and applying the new one.

All in all, it can be quite a pain and we know of many people who've found the job of choosing the right card initially for some potential water-cooling down the road to be a stressful one.

With the GTX780 Poseidon, ASUS are seeking to rid you of that stress by producing a graphics card that is as happy taking advantage of its Vapor Chamber and dual fans to keep your GTX780 cool under air, as it is utilising in-built barbs and a water-channel to transform into a water-cooled offering without you needing to reach for the screwdriver once.

As you can see the DirectCU H20 is extremely clever in its design. By surrounding the Vapor Chamber with the water channel you get the best of both worlds, with the GPU in direct contact with the Vapor Chamber/water channel and the huge block of aluminium fins on top of that which provide the surface area necessary to give the two PWM fans the best chance of expelling the heat. 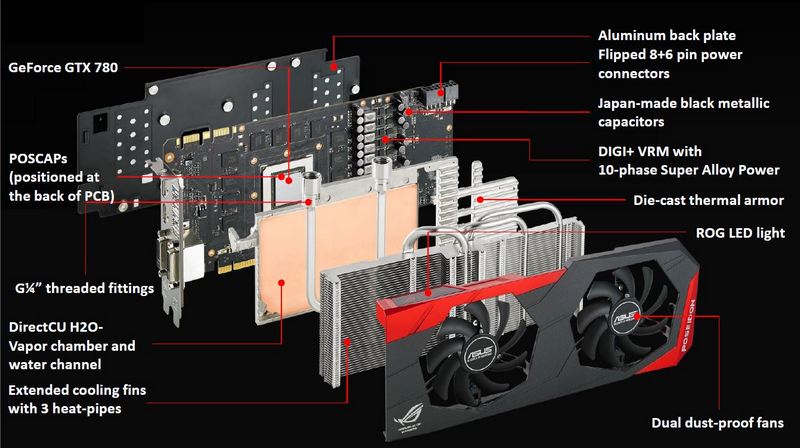 With G1/4 inch threads the Poseidon is capable of accepting all of the popular barb sizes, so including it in your loop is the simple matter of attaching a couple of barbs, sliding on your tubing and away you go. No messing about with thermal pads or tiny screws and, as certainly the card for people new to the water-cooling world, it's the most hassle-free solution imaginable. 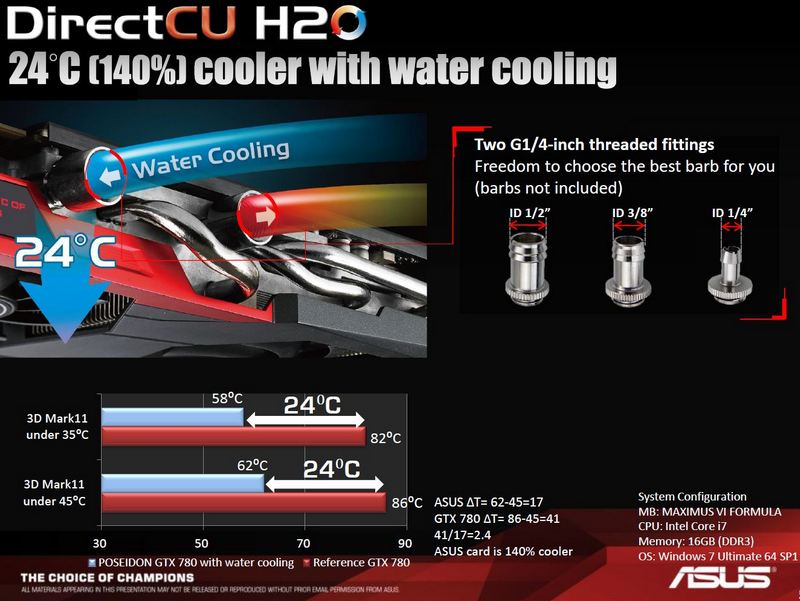 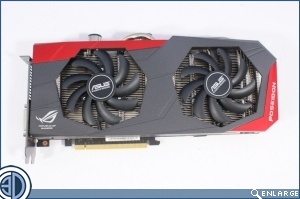 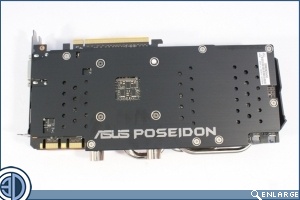 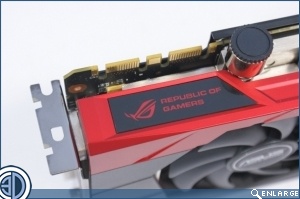 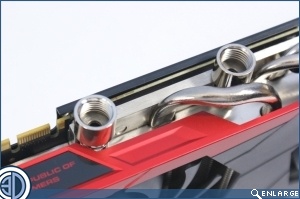 It's not only the cooler that makes the Poseidon GTX780 something to lust after, but ASUS have given it the full ROG branding, with the black and red colour scheme and pulsating ROG logo. As well as that there are 10K Black Metallic CAPs and Super Alloy Chokes to give you the best possible 10 Phase Power so it should overclock as well as the Republic of Gamers branding would lead you to hope.

Of course all this cooling capacity is most useful with the nVidia GPU Boost 2.0, which really takes advantage of every single degree spare to maximise GPU clock speed and give you the very best performance possible.

We will have a full review of the ASUS GTX780 Poseidon soon, so keep checking OC3D. In the meantime, let us know what you think about the Poseidon in the OC3D Forums.

Niklocen
I can see that the backplate has a different cut out than the DCII card in the VGA Hotwire soldering points does it mean that you don't have to short PGR152 solder pads and remove the PGR 100 resistor to use VGA Hotwire? Or does it have an unclocked power target?Quote

Cru
Quote:
it's gonna be like a watercooled, overclocked 780. nothing new there tbhQuote

deegee
I believe someone else said "jack of all trades, master of none" it will be OK on air, but not as good as it could be, it will be OK on water, but not as good as it could be... Do people really umm and ahh over going to water or not that much? I'm not so sure... I am happy to be proven wrong but I would say the people going the watercooling route would be happier with a dedicated watercooling block and would be happy to do the swap, I don't think anyone would be daunted by the swap either. This seems to me marketed towards people that are confused if they want to go to watercooling or not? Once the decision has been made, its best to be balls deep