Sales of "gaming" monitors are on the rise, displays which offer their users high refresh rates of 100Hz or over and often feature support for variable refresh rate (VRR) technologies like FreeSync or G-Sync.

Within camp Nvidia lies what are likely to be the largest and most capable gaming displays in the market, monitors which are known as Big Format Gaming Displays (BFGD), packing 65-inch screens with 4K 120Hz video support, an integrated Nvidia Shield TV unit support for G-Sync Ultimate and more. The monitor market doesn't get much better than this.

ASUS' BFGD is their ROG Swift PG65UQ, which uses an 8-bit 4K AMVA screen which packs a 384-zone full array local dimming backlight and supports 95% of the DCI-P3 colour space and complies with the DisplayHDR 1000 standard.

At Computex 2019 it seems clear that ASUS' BFGD is ready to hit the market, with a release for the screen being planned for 2019, bringing some competition for HP#s BFGD, the Omen X. ASUS' PG65 BFGD unit lacks the integrated soundbar that's offered by HP's Omen X, making it possible that ASUS will offer a lower, sub-$4999, price point. 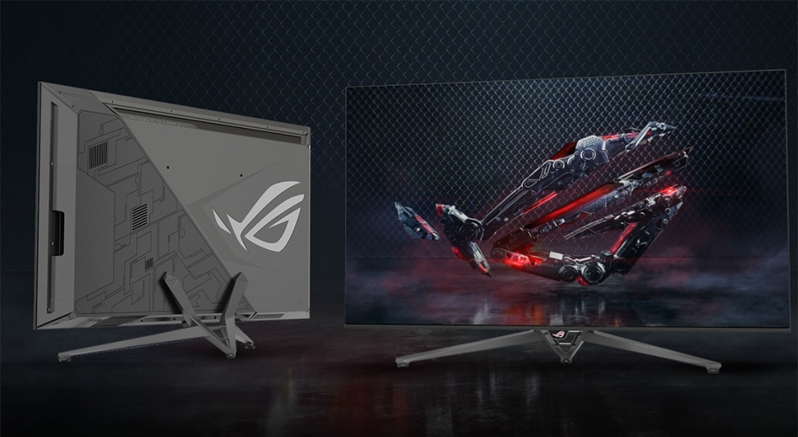 Screen technology is only going to get better in the coming years, with HDMI 2.1 bringing to the table support for variable refresh rates while high-end HDR capabilities start to trickle down to more affordable prices.

You can join the discussion on ASUS' 65-inch ROG Swift PG65UQ BFGD G-Sync Ultimate HDR monitor on the OC3D Forums.