On Geekbench, via TUM-APISAK on Twitter, Apple's 16-inch MacBook Pro has been shown with Intel's i9-9980HK processor and a Radeon Pro 5500M graphics card. This graphics card is basically a Pro version of AMD's RX 5500M, though it does feature two more CUs. That's right, Apple's MacBook Pro will use a graphics card that's more powerful than AMD's consumer-grade RX 5500M.

The Geekbench listing below shows that this Radeon Pro graphics card features 24 CUs, giving the graphics card 1536 compute units. This is a full 50% upgrade (in terms of CU count) over the Radeon Pro 560X used in most of today's 15-inch MacBook Pro. Combine that with AMD's enhanced RDNA graphics architecture, and that's a major mobile upgrade for Apple.

The specifications list below also suggests that AMD's Radeon Pro 5500M will also feature 8GB of VRAM, which is two times higher than what's available on all of today's MacBook Pro devices. 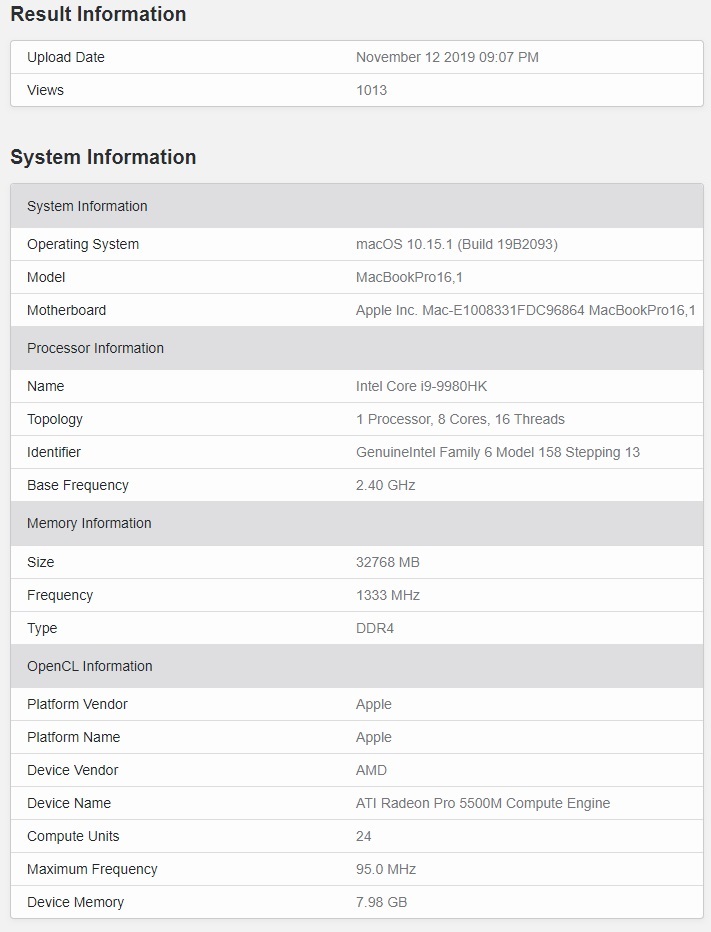 Regardless of what way you want to look at this, RDNA's presence in Apple products is a win for AMD. That said, it raises the question of why AMD has not announced a 24 CU Radeon RX 5500 series offering for either mobile or desktop products. AMD's RX 5500 and RX 5500M both feature 22 active CUs, granting these products 1408 stream processors instead of the 1536 cores that are available in this Apple product.

You can join the discussion on AMD's Radeon Pro 5500M appearing on Apple's planned 16-inch MacBook Pro on the OC3D Forums.

Giggyolly
I wonder how much better it is than the 20 CU Vega GPU in the current MBP 15" models.Quote
Reply