AMD has announced that they will be holding a Capsaicin Event at GDC 2017 on February 28th, where AMD will be showcasing some of their newest graphics hardware.

Below is AMD's description of the event, which specifically mentions new graphics hardware and VR technologies.

GDC is where developers not only shine, but share how they create everyday gaming magic from raw code, technology, and imagination. On February 28th, we’re beginning the day with our always-spicy Capsaicin livestream, but fiery feasts are best experienced when accompanied by something cool and creamy to satisfy the palette.

This year at GDC, join us on the 28th for our Capsaicin livestream and our Cream developer sessions - insightful and inspiring talks focused on rendering ideas and new paths forward, driven by game industry gurus from multiple companies including Epic and Unity.

The Capsaicin livestream kicks off at 10:30 AM from Ruby Skye, a feature-packed show highlighting the hottest new graphics and VR technologies propelling the games industry forward. The Cream Developer Sessions will start shortly after at 2:30 PM, with a special talk featuring Unity and Epic. 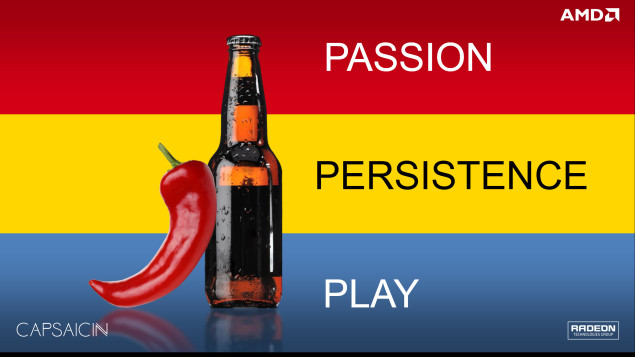 At this time AMD's Capsaicin event does not specifically mention AMD's upcoming Ryzen CPUs, though AMD could use this event to their new CPU platform.

You can join the discussion on AMD's Capsaicin and Cream Event on the OC3D Forums.

NeverBackDown
Looks like we will finally catch a glimpse of VegaQuote

AngryGoldfish
Should be fun to watch. Hopefully we'll see Ryzen and Vega running some gaming benchmarks.Quote

Kilbane
Could be some 'Spicy' announcementsQuote
Reply