Will 4GB soon not be enough for gaming?

If what AMD's saying is true, we may be reaching the end of the 4GB GPU era. Games are starting to use more and more VRAM on PC, stretching the limits of what's possible on many existing graphics cards.

As we start moving into the next console generation, VRAM capacity will quickly become a limiting factor for new games. The PlayStation 5 and Xbox Series X will both feature 16GB of combined memory, a factor which will make PC GPUs with 4GB of VRAM seem woefully inadequate. This is why AMD's now recommending that PC users "Game Beyond 4GB".

With their Radeon RX 5500 XT, AMD has tested models with 4GB and 8GB of VRAM to see how much difference the extra VRAM can make at 1080p, uncovering a 12-24% performance change across five modern games. Beyond raw performance figures, the lower VRAM cards could suffer from more gameplay stutters and increased texture pop-in.

Aside from AMD's 4GB RX 5500 XT, all of the company's modern graphics card lineup features 6GB or more VRAM. Beyond that, AMD has also supported 8GB GPUs for the mainstream market since 2016 with their 8GB RX 470 and RX 480 GPU models. Moving forward, VRAM capacity will become increasingly important, especially as game developers start to fully utilise the memory of next-generation consoles. 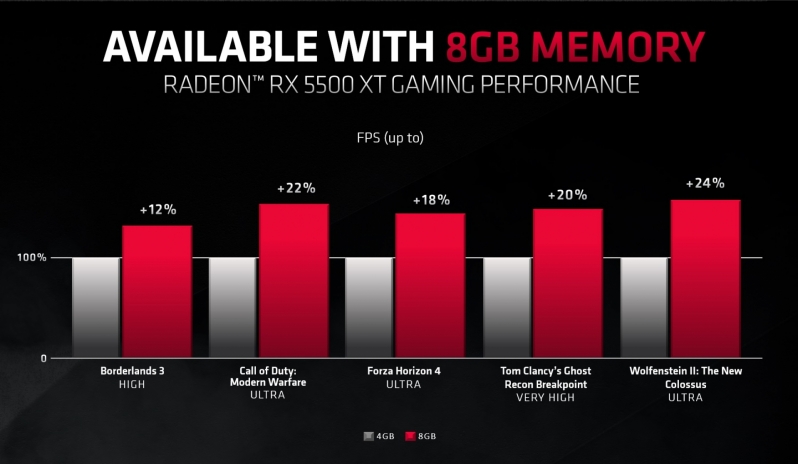 If you are purchasing a graphics card with longevity in mind, having plenty of VRAM is a key consideration. Running out of memory can cause a number of major issues, and even now, 4GB graphics cards are struggling in some of today's games.

You can join the discussion on AMD VRAM recommendations for gamers on the OC3D Forums.

looz
Well, it's a 1080p card and IMO you don't need current gen Ultra textures at that resolution. Dropping to High would equalize the FPS in most cases.Quote

demonking
Wonder if AMD got wind that Nvidia will be releasing their 3060 or whatever it is as a 4gb model and are trying to make these look redundant before they come out or push Nvidia to put more ram on there mid range cards and push the prices up or hurt their profitability.
Either way they're right, as processors are getting quicker and able to push more data to the GPU's to render, more vram is going to be needed as is ram for the processor. I wonder how soon the combined 16gb is going to be a bottleneck in these new consoles?Quote

AlienALX
Nah I think it is more than the new consoles have more, so games will need more. And it will get to a point where lowering settings just won't work, same as the 780 and all of those 3gb cards.

As consoles get more VRAM and higher resolutions the textures just become bigger.Quote

TBH, these days I feel sorry for anyone that was suckered into getting the 3GB model of the 1060. I still think that card is false advertising, it just wasn't a 3GB 1060, the fewer CUDA cores too.

AlienALX
Quote:
It's like I said dude, lower end cards are solely designed not to last.

It's just to keep you coming back. AMD and Nvidia know exactly where the gaming market is headed long before we do. And they know what to put out as a product and what to market. A 3gb 1060 got the job done then. Right then in that moment. That doesn't mean it was ever going to last.

VRAM is important. Very important. Once you run out no matter how good your card is you've had it.Quote
Reply