At SIGGRAPH 2017, SSF Network has been able to get an exclusive look at AMD's upcoming RX Vega NANO, a GPU that is designed to utilise AMD's new Vega GPU design and enable the construction of low-power, small form factor systems.

This GPU looks very similar to AMD's older R9 Fury Nano, with a cooler design that comes with a similar aesthetic as the RX Vega Limited edition. We can see the same silver shroud design and the same red Radeon logo on the top edge of the cooler.

At this time the specifications of this GPU can only be guessed at, though if it is anything like the R9 Fury Nano, it will utilise all the GPU cores used in its larger counterpart but at lower clock speeds to maintain a low TDP and thermals. 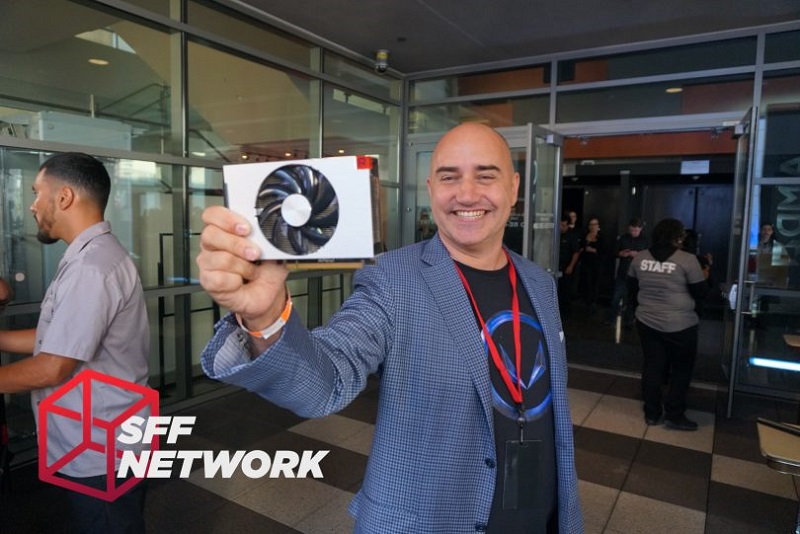 At this time it is unknown when AMD will announce their RX Vega Nano officially, though it is expected to be released after their mainline RX Vega series of GPUs.

You can join the discussion on AMD's RX Vega Nano on the OC3D Forums.

AlienALX
Not really much point unless Nano was a hot seller. Lots has changed since then, you can get 1070 minis now.Quote

Korreborg
The 1070 has 60w lower tdp than the 56.
So a card like that needs to be dirt cheap to make sense.Quote

tgrech
It's important to remember than the TDP of AMDs new cards includes the TDP of the memory, while non-HBM cards don't. It's already fairly pointless to compare different manufacturers TDPs anyway and they're not an accurate indicator of real world power consumption(And nor are they meant to be).

The previous Nano card was at times efficient than Maxwell and Polaris despite being on 28nm thanks to power envelope tweaking and good binning. Given Vega will be in APUs soon in fairly reasonable core counts I'd expect this can be an incredibly effecient architecture when it needs to be. I'm sure this card will be a demo of what Vega can really do in perf./watt with high core counts and low clocks. Expect it to be just as revolutionary compared to both Nvidia and AMD cards as the last Nano was in terms of system power(And remember, HBM2 uses significantly less power than GDDR5X).Quote

AlienALX
Quote:
What the RAM pulls is irrelevant because they were measuring at the wall. And when review time comes that is how they will be measuring the overall power draw.Quote

tgrech
Quote:
Who were measuring at the wall? No one has tested this model yet have they?. Just pointing out that having more of the graphics card integrated into the GPU package itself will raise the GPU package TDP without raising overall power consumption(Which is why you can't compare Vega's package TDP with other models when trying to compare total power consumption- a mostly unrelated metric besides some vague correlation between he two).

Plus, using TDPs for the FE model to try and estimate or compare the Nanos power consumption is a horrifically flawed and inaccurate way of going about it. With HBM2, TDP for 16GB cards will be different from 8GB cards, and memory clocks now also affect package TDP significantly more as well.Quote
Reply