Can this be recommended over the GTX 1660?

With the recent release of Nvidia's Turing-based GTX 1660 graphics card, we have been wondering how AMD will react to the evolving mid-range graphics market, where Nvidia offers increased levels of performance at price tags that start from £199 in the UK.

At launch, things were not looking good for team Radeon, with the GTX 1660 outperforming the Radeon RX 590 in many games while offering lower levels of power consumption. Something needed to change to make the RX 590 relevant again.

Over the past week, the market has shifted. RX 590 graphics cards now cost as little as £199, giving it cost parity with cheaper GTX 1660 models, while also offering a full 8GB of VRAM and three bundled games. Not a bad deal if you need a kickstart to your PC gaming collection.

Is the RX 590 a good card today for £199? Yes, but only when the GPU's three-game bundle is accounted for. The RX 590 uses the same Polaris architecture as the RX 480, while the competing GTX 1660 utilises Nvidia's latest Turing core design, giving Nvidia a distinct advantage in terms of power draw.

We have analysed all three games that ship with the RX 590, with every one of them offering great performance on our ASUS Radeon RX 580 Strix graphics card. The RX 590 is basically an overclocked RX 580 on 12nm, which means that this graphics card would offer even higher performance levels. This game bundle is worth over £100 at retail.

Please read our performance reviews for The Division 2, Devil May Cry 5 and Resident Evil 2 (remake) to have our full impressions of each of these PC releases. 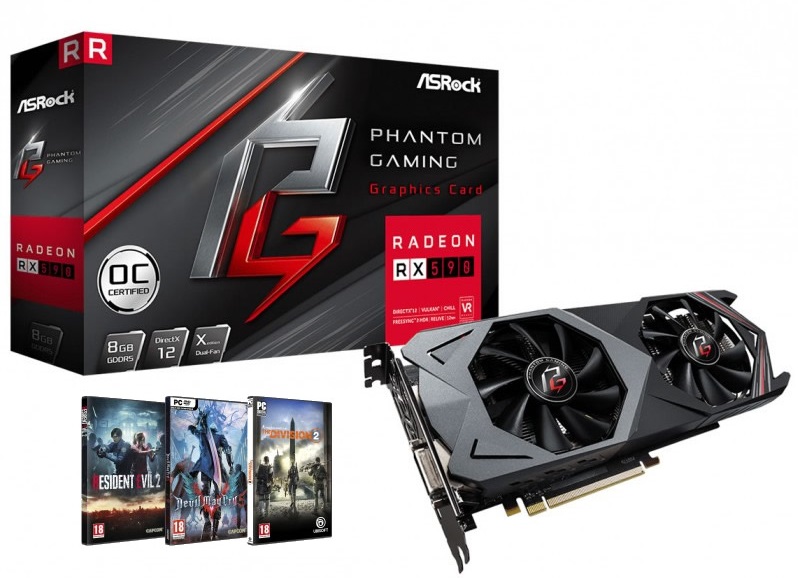 If you are looking to upgrade your PC to play a game like The Division 2, and haven't yet secured your copy of the game, then the Radeon RX 590 isn't a bad shout. If you already plan to play these PC games, then this £199 ASRock RX 590 Phantom Gaming X is a great deal. If not, then it may be best to consider other options or consider selling these game codes to friends.

You can join the discussion on ASRock's RX 590 Phantom Gaming X selling for £199 on the OC3D Forums.

AlienALX
Nice deal and a nice looking card, especially from the back