There's a reason why they are called

Rumour has it that AMD's Radeon RDNA 2 architecture won't be the same as the "custom RDNA 2" architectures on Microsoft's Xbox Series X and PlayStation 5, suggesting that AMD has created a superior product for its PC-centric products.

While their source as tight-lipped on the topic, WccfTech said that AMD's RDNA 2 forced its semi-custom partners to use "custom RDNA 2" within the specs lists of both next-generation consoles, a factor which will help AMD to differentiate their graphics products from both console systems.

Are both the Xbox Series X and PlayStation 5 using the same "custom RDNA 2"?

For both the Xbox Series X and PlayStation 5, AMD provides semi-custom silicon for both Microsoft and Sony, allowing both manufacturers to work with AMD on their future hardware designs. Be definition; these semi-custom hardware designs are custom, which means that Sony and Microsoft can define custom hardware tweaks and feature upgrades for their systems, outside of what AMD can provide with its CPU/graphics IP.

In Sony;'s PlayStation 4 Pro, Sony utilised custom checkerboarding hardware, and while this feature wasn't used widely on the system, it is an excellent example of how custom silicon can be used to enhanced the capabilities of a console. With Xbox Series X, Microsoft lists "Patented Variable Rate Shading" (VRS) as a feature, suggesting that Sony may not have access to the same functionality on its RDNA 2 silicon. It is also possible that Sony's PlayStation 5 has an inferior implementation of Variable Rate Shading.

It is possible that Microsoft and Sony aren't using the same "Custom RDNA 2" architecture, and this represents a unique possibility for AMD.

We know that silicon for both Sony's PlayStation 5 and Microsoft's Xbox Series X has been in manufacturing for months, raising the question of where RDNA 2's PC variant is. If RDNA 2 was design complete and being manufactured, why hasn't AMD created RDNA 2 silicon for its PC GPU lineup?

Right now, AMD's RDNA 2 architecture is rumoured to release in late 2020 with an October release date. That seems pretty late when Xbox and PlayStation developer kits have already shipped, and both systems are being manufactured in high volumes in preparation for the system's holiday 2020 launches.

If AMD's PC RDNa 2 architecture is superior, it suggests that both next-generation consoles are using what could be called an "RDNA 1.5" architecture, rather than full RDNA 2. That said, this is merely speculation.

AMD has made some big promised with RDNA 2, offering full support for DirectX 12 Ultimate while packing a 50% increase in performance-per-watt over today's Navi graphics cards.

This suggests that RDNA 2 will be a huge leap for AMD's Radeon technology. AMD has already promised increased clock speeds, improved performance-per-clock (IPC) and logic enhancements, alternations which will all deliver notable performance increases for RDNA 2-based graphics cards. 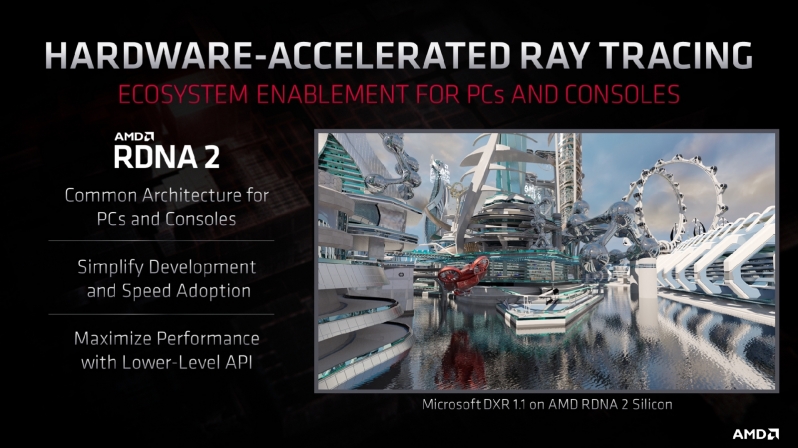 RDNA 2 promises to be a bigger leap forward than AMD's original RDNA architecture was over GCN, and that's a big deal. Expect some big changes to the GPU market over the next few years, as AMD's promising some big changes, and that will cause its competitors to work harder for their market share.

You can join the discussion on AMD's RDNA 2 architecture and its reported superiority to RDNA 2's console iterations on the OC3D Forums.

AlienALX
Most of the bugs have been fixed.Quote

AngryGoldfish
I would be surprised if the RDNA2 we see for desktop ISN'T different in a lot of good ways compared to the console. They could hardly charge €700 for a just GPU that is in a €500 console that has nothing more than a clock speed boost.Quote

NeverBackDown
Quote:
Well MS and Sony would have guaranteed contracts to sell or at least pay x amount of money regardless of how many sold so AMD would still turn a profit.Quote

Dicehunter
Not really surprised, The SOC only has so much room, I'd expect the fully fledged GPU to be more powerful with more features.Quote
Reply