This driver is ready for Detroit: Become Human and much more

This driver release brings a tonne of new features to Radeon's Software suite, from an in-game internet browser to Integer Scaling, which we dive into here (Integer Scaling tested).

For a more in-depth look at this driver's features, please follow this link. 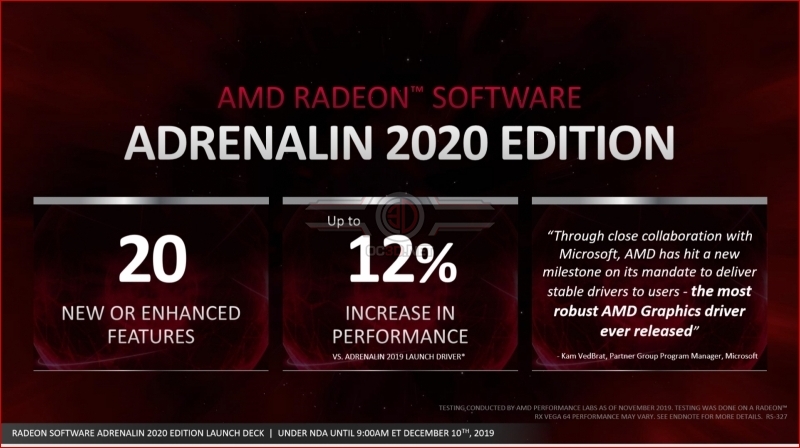 - Introducing the new Radeon Software. A brand new, modern, accessible and powerful gaming application.
- Now available via Overlay using Alt+R for fullscreen or Alt+Z for sidebar while you game!
- Gaming tab lets you access games stats, view or edit media, adjust game settings and launch your favourite games directly from Radeon Software.
- Streaming tab gives you a new, powerful and easy to use streaming experience with controls for streaming, viewing and editing your stream all in one area.
- Performance tab lets you get detailed statistics on your current system performance or overclock and fine tune your graphics product.
- User profile system that allows easy configuration for Radeon Software features, so you don’t have to.
- New Built-in web browser let’s you lookup important game information, walkthroughs or tutorials without having to leave your game.

Provides increased performance when fast motion is detected via dynamic resolution scaling with little to no perceptible change in image quality.

Scale images on screen from one pixel to four or more, allowing classic games to get a retro, pixel-art-style look.

Play your PC games anywhere on any mobile device without the restriction of being connected to the same home wireless network.
Cleaner interface with a unified Radeon Software look, now available across all AMD Link enabled devices.
All streaming functionality has been moved to one area for easier access.
Improved bit-rate support at up to 50Mbps.
x265 game streaming is now supported for better image quality and less bandwidth.
Instant GIF support added directly from your device.

‘One-click’ easy setup with a new and improved factory reset option.
New option to keep your settings between installations, including during factory reset.
Improved install times and error detection.

- Radeon RX 5700 series graphics products may intermittently experience loss of display or video signal during gameplay.
- Out of Video Memory error may randomly appear on some Radeon R9 200/300 series graphics products when playing Fortnite™ with DirectX®12 API enabled.
- Ring of Elysium™ may experience lower than expected performance on 1440p and 4K display resolutions.
- Star Wars Jedi: Fallen Order™ may experience an application hang after the initial game cutscenes on some Radeon RX 5000 series graphics products.
- Enabling Performance Metrics Overlay may cause black screens or corruption on some applications.
- Task switching out of some games with Radeon ReLive enabled may cause a black screen when switching back into the game.
- Invoking Radeon Overlay may cause games to lose focus or become minimized when HDR is enabled within Windows®.

- Switching between borderless and fullscreen in some games when Performance Overlay is enabled and Radeon FreeSync is enabled may cause stuttering.
- Some Vulkan® gaming applications may crash when performing a task switch with Radeon Image Sharpening enabled.
- Applying DirectML media filters to media in Radeon Software Gallery may cause video memory to fail to be released once completed. A system restart will resolve this issue.
- Integer Scaling may cause some video content to show flicker when the display resolution is set to less than native resolution.
- Removing a game profile from Radeon Software may cause Radeon FreeSync and/or Virtual Super Resolution to become enabled.
- Radeon ReLive may appear to be missing or not available to install on some Radeon R9 380 series and Radeon R9 285 series graphics products.
- Performance Metrics Overlay may appear to lock frame rate at 60 fps when performing a task switch in or out of a game.
- Battlefield™ V may experience an application hang when changing settings in game with Radeon Boost enabled on Radeon RX 5700 series graphics products.
- Performing a resolution change while Radeon Software overlay is open may cause an application hang or TDR.
- Enabling Radeon Image Sharpening on HDR enabled displays may cause colors to become washed out.
- Performing Upscale on a large resolution video or screenshot may fail to apply and cause an error message.

- Tuning: In some cases when changing from Preset to Automatic, settings don’t apply or will cycle back to the original setting.
- Media: Playback of videos may reset if the device changes orientation during playback.
- Media: Corruption may occur when playing back media while using the 1Mbps bitrate setting.
- Gaming: Under certain conditions Now Playing changes back to Desktop or the last played game instead of displaying the currently streaming game.
- Gaming: Streaming may stop if device is left idle for an extended period of time.

RS-327 - Testing conducted by AMD Performance Labs as of November 2019. Testing was done on a Radeon™ RX Vega 64, resulting in an average of 12% performance uplift in select titles configured with a range of settings. Performance may vary. 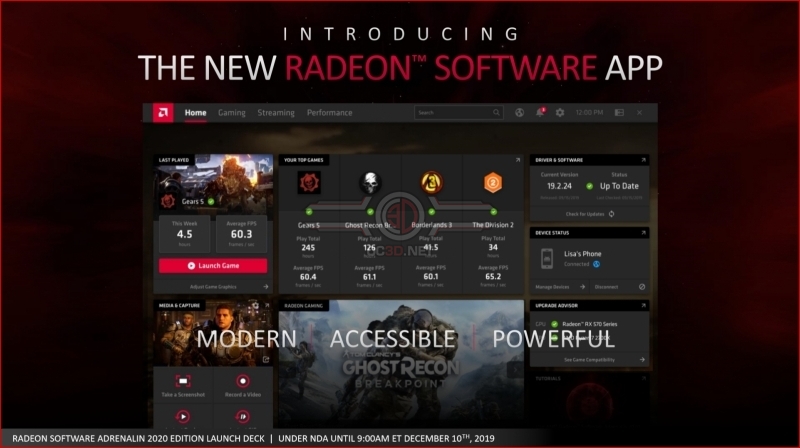 Daiyus
Cool, I'm looking forward to trying this out. Thanks for the detailed information as always WYP.Quote

robbiec
Works flawlessly on my dual Vega64s (last beta didn't get on with them) I like the new layout and options within but too early to comment on how they work in practise. I'll try out the integer scaling on X-Wing or WC Privateer or Quake 2 and see how it gets on but they might be too old