A huge performance boost over the Radeon RX Vega series.

It looks like one of AMD's upcoming Navi graphics cards have appeared on the 3DMARK Time Spy database, coming user genesis_surge. The graphics card is unknown at this time, but given its listed boost clock of 1,878MHz, our guess is that this is AMD's Radeon RX 5700 XT.

This benchmark listing was first uncovered by WCCFTech's Keith May, who notes that the benchmarked PC was similar to his own test system, albeit with a stock i7-8700K, with his system featuring an all-core 5GHz overclock. 3200MHz DDR4 memory was also used with this hardware setup.

In all, this system offered a final score of 8575 points, 8719 GPU points and 7843 CPU points, placing it higher than May's Radeon RX Vega 64 and Nvidia's GTX 1080. This placed the unknown Radeon graphics card, which is thought to be a Radeon RX 5700 XT slightly under Nvidia's RTX 2070 Founders Edition (which achieved a Graphics score of 8901), though this could be due to his test system's higher CPU clock speeds.

What this shows is a significant performance boost when compared to AMD's existing Vega series graphics cards in 3DMARK's DirectX 12 test suite. That said, similar performance to Nvidia's RTX 2070 will place Radeon in a tough position if they don't get their pricing right. 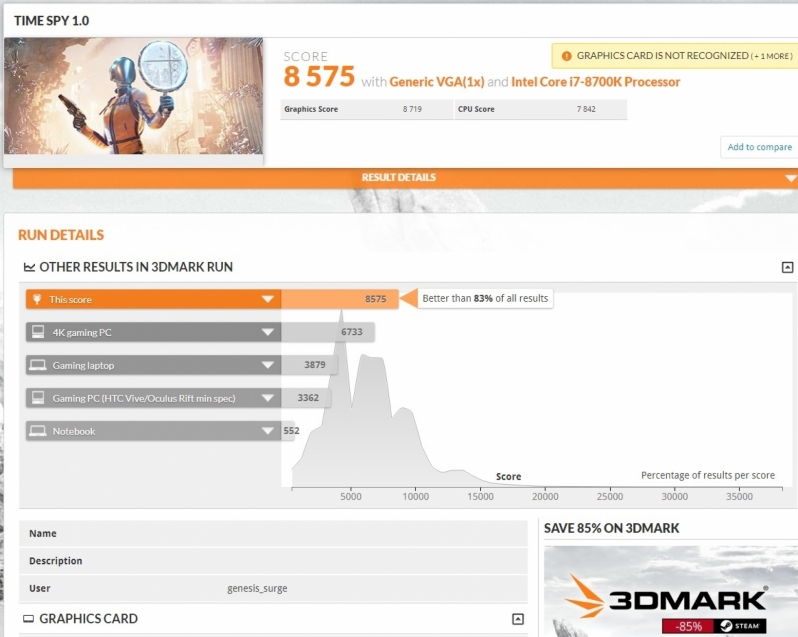 You can join the discussion on AMD's Radeon RX 5700 XT appearing on the 3DMARK Time Spy database on the OC3D Forums.

AngryGoldfish
If the price is the same as an RTX 2070, I don't see the point for anyone to buy it over an RTX 2070 other than those who refuse to have an Nvidia card. There's not a lot about Navi 10 architecturally that I see to incentivise buyers. So rather than aiming at gamers and giving them something unique that sets them apart and their products, they're potentially aiming at AMD fans only. I don't agree with that. I could understand with Vega and how expensive it was to manufacture, and how enthusiasts would still buy Nvidia even if the competition was equal, so why undersell themselves? But Navi should not be as costly and is seemingly an architecture built for gaming across a wide range of applications. It's attempting to be an all-encompassing gaming architecture. Why price it above what most gamers can afford?

I'd love to know what's going on at the top of the AMD management pile. If they do price match Nvidia, what is their aim? What is their long term goal? What have their marketers and analysts told them that we might not know? Some have said AMD are happy that Nvidia released such overpriced cards, because now they can price them the same and reap higher profits. It does make sense, but I don't think it'll help the PC market in the long term. I won't be buying a card that's no better than the competition a year later. Why would I? AMD wouldn't be giving me a reason to.Quote

NeverBackDown
If it performs the same and is $50 cheaper let's say then why wouldn't you buy it? Because the architecture doesn't incentivise you? Why because it's missing Tensor cores and RT? That's a silly thing to even consider. Even RTX cards are missing that. They may have them. But they are useless and unused. There's what only enough games that use them you could count on one hand isn't there? Even after a year? What kind of incentive is that? On top of the fact that one of its major features absolutely destroys any card including the 2080ti. Using RT as an argument for a comparison between a 2070 and a 5700XT is kinda boggling. There's hardly anything that uses RT AND it tanks performance to essentially console levels. And so far the whole AI AA implementation has proven to be a blurry and worse looking overall image ON TOP OF it's limited to roughly 60fps before it gets disabled


I see no argument between architectures where Navi is competing. I see it as a non RTX 2070(because it's useless features) and a 5700XT.
It's all price/performance.

Emu
Quote:
Historically AMD have had crappy drivers at launch and then they go and improve performance over time. This means that this card could potentially end up better performing then the RTX 2070 after a few months.
That said, 200 points is within the error of margin for 3D mark runs so it could already be performing on par with the 2070 with prerelease drivers.Quote

tgrech
Seems to be >10% more gaming performance for >10% less money, it's not a giant value proposition but it's there.Quote

Avet
I have stated this in some previous post. Wendell (level1techs), and Eposvox are recommending AMD systems (Threadripper, Radeon VII) for dedicated rendering stations do to their very good render performance, and low cost. And, even, Intel 9700K over any AMD for your editing machine due to it's smooth work flow, and realtime performance. That way you work on your new videos, while edited ones are rendering at the same time. It beats any gazillion core workstation.

Now imagine R9 3950X, 64 GB of RAM, 2x RX 5700 XT, PCIe 4.0 NVME. That thing would grind through renders for much less than the price of the competition. You can probably even slap a decent open loop on it and have money left for quite a few beers compared to the alternative.

Also with Intel's shortages of components many system builders have started offering AMD rigs. We will have tons of full AMD gaming systems. With probably better price than green/blue ones they will sell bucket loads of them. And the performance will be in the same ball park. Most of the pre-built gaming systems are in 2060/2070 range anyway. AMD will probably offer some incentive for system builders to make all AMD rigs.