Rumour has it that AMD plans to preview its next-generation RDNA 2 architecture at Computex 2020, revealing what team Radeon has in store for us later in the year.

CES 2020 is expected to a big deal for AMD, who are rumoured to launch new 7nm Zen 2 powered Ryzen mobile CPUs at the same even alongside their long-rumoured 48-core and 64-core Threadripper processors.

This information comes via Wjm47196, a leaker over on the Chiphell Forums who has been correct regarding Radeon graphics leaks in the past. This includes the predicted launch of AMD's Radeon RX 590 in late 2018 and the Radeon VII in Q1 2019 and the release of Navi in mid-2019.

Right now, AMD has revealed very little about its Navi 2 architecture, but given the largely revamped nature of AMD RDNA architecture, it is likely that AMD has other significant changes to implement. Support for hardware-accelerated raytracing is one likely feature, though it is possible that we will see further architectural changes that will help increase Radeon's graphics IPC. This would help AMD generate higher levels of system performance in normal gaming workloads.

With RDNA 2, AMD is also likely to target the high-end of the graphics card market, bringing Radeon into the realms of Nvidia's RTX 2080 Super and RTX 2080 Ti. This would require a GPU with more memory bandwidth, forcing AMD to adopt a larger GDDR6 memory bus, perhaps 384-bit, or utilise HBM2/HBM2E memory. Nvidia is also likely to launch post-Turing graphics cards sometime in 2020. 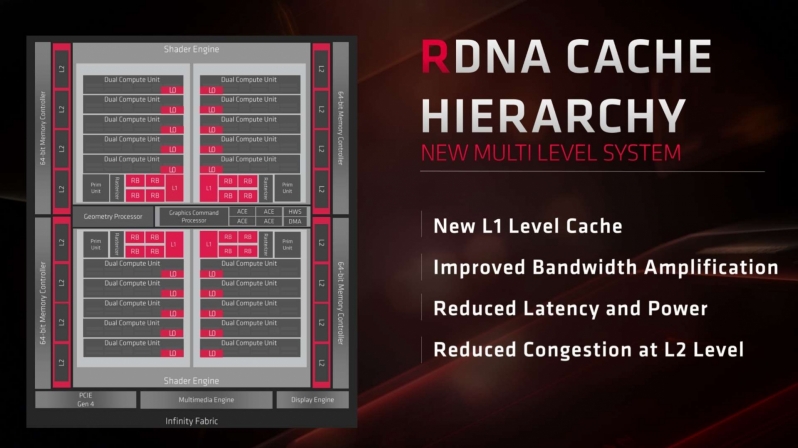 You can join the discussion on AMD's rumoured RDNA 2 plans on the OC3D Forums.

NeverBackDown
As long as it performs great I don't care about RT support. I just want a big jump from my gtx 1080 at a reasonable price.Quote

tgrech
Another feature I think we could see is Variable Rate Shading, with AMDs patents on their implementation being filed a little before their RT acceleration patents.Quote

Giggyolly
I'm never going to give 2 s about RT, as long as it requires a significant performance hit to run. 5-10% performance hit, then I will consider it.

AngryGoldfish
I thought there was going to be another RDNA1 GPU released before RDNA2? And it was supposed to compete with the RTX 2080 Super.Quote
Reply