So what's next for AMD's RDNA graphics architecture? The Radeon RX 5700 and RX 5700 XT (see our review here) are now here, but what#s team Radeon's next move?

A new Radeon graphics card that's reportedly called "Navi 14" has appeared on the Compubench database, revealing a graphics card that seems to be smaller than the Navi 10 silicon that's used in the RX 5700 series, suggesting that Navi will become smaller before it hits the ultra-high-end market.

Compubench misreads AMD's new RDNA architecture, seeing AMD's pairs of new compute units as single entities, reading 20 CUs instead of 40 CUs for AMD's RX 5700 XT. Assuming the same applies to Navi 14, AMD's next RDAN graphics card will feature 24 CUs and a total of 1536 stream processors.

With this core count in mind, it looks like AMD's Navi 14 GPU will become the GPU core behind AMD's RX 5600 series, replacing AMD's Polaris graphics lineup in the low-end of the GPU market. With 24 CUs, Navi 14 sits between the RX 560 and RX 570 in terms of stream processor count, but Navi's combination of higher clock speeds and IPC improvements will result in an incredible boost to graphics performance.

So what's the point in Navi 14? Simple, offering low-cost, low-power graphics to the masses. Navi 14 could bring Radeon into notebooks in a way that hasn't been possible for several hardware generations. Navi 14 could also become the GPU behind Apple's next-generation MacBooks, with today utilise AMD's Polaris-based RX 560 silicon. 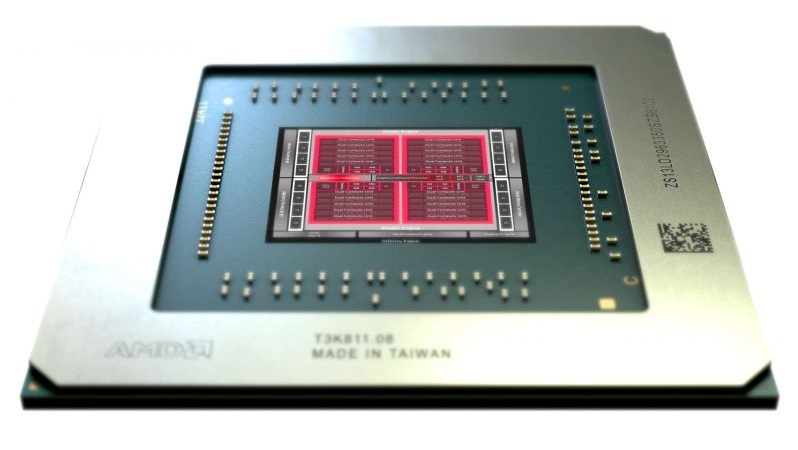 With Navi, AMD wants to maximise the impact of its products by targetting the broadest possible audience, and with Navi 14 that market appears to be the low-cost graphics market as well as the low-power mobile market. We fully expect to see a small Navi graphics component like Navi 14 in future MacBooks, though it remains to be seen how widely other notebook manufacturers will adopt Navi.

You can join the discussion on AMD's small Navi 14 graphics component on the OC3D Forums.

tgrech
Yeah I don't think they have much choice on how large they can go till 7nm EUV is ready for prime time starting next year, I guess it's also questionable whether it's worth releasing a big die version of 1st gen RDNA at all given there are some obvious features missing against competitors that 2nd gen RDNA will close up, that will become far more relevant with titles in Q1 2020, though 2nd gen RDNA would also be reliant on the node improvements from EUV from the looks of it(And its node would have been set in stone a long time ago with the design rule changes for EUV).Quote

Giggyolly
Makes sense, it will probably be a good performer on the entry level and shut down the 1660 and 1650.
But we want to see a 64CU Navi chip (or larger?)! 30% more CUs, possible 30% more performance.. That'll probably be 350W monster; oodles of fun.Quote

NeverBackDown
This is expected tbh. Also they were 100% going to pair this with a Ryzen 3000 APU. Mine as well fill the in between!

I know you meant Zen 2 APUs, but those aren't expected for another few quarters. Perhaps a CES 2020 reveal. TBH, Navi would be perfect for these APUs, as their cache changes, compression changes and tolerance for faster memory makes gaming a lot more viable from a pure bandwidth perspective.Quote
Reply