AMD's Next-Generation Navi GPUs are reportedly running in their labs

AMD's Next-Generation Navi GPUs are reportedly running in their labs

Rumour has it that AMD's next generation of graphics cards are already up and running inside the company's labs, paving the way towards the world's first 7nm exclusive GPU architecture.

Right now it appears as if AMD's post-Vega Navi architecture will release in the second half of 2019, with Fudzilla's sources claiming that AMD's 7nm Navi graphics cards are "better than expected", though at this time it remains unclear whether or not this claim is regarding performance, power consumption or raw performance.

Fudzilla's sources remain convinced that AMD's Navi architecture will release within the mid-range market first, acting more as a replacement for Polaris than a replacement for Vega, with early rumours suggesting that they will offer performance levels that are similar to Vega while providing a mid-range price point. High-end Navi graphics cards are not expected until early 2020.

Since the release of Vega, AMD's Radeon Technologies Group (RTG) has been tight-lipped regarding all of their future product plans, refusing to reveal the names of future microarchitectures beyond Navi. Other rumours have suggested that AMD's mid-late 2020, post-Navi, graphics architecture is rumoured to be called Arcturus. 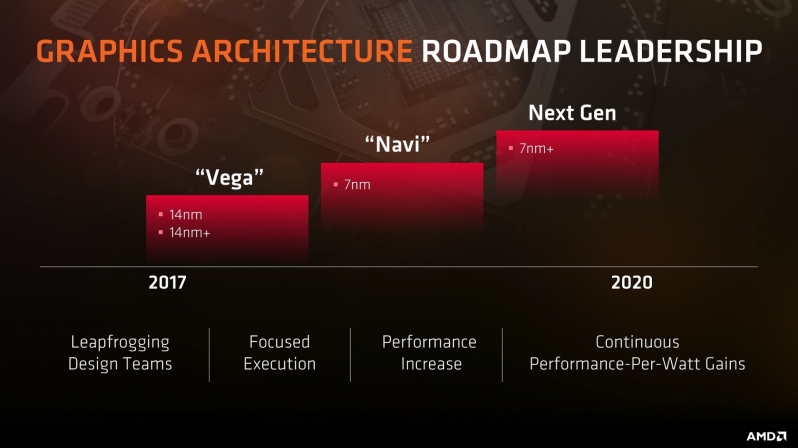 AMD has already stated that they plant o discuss 7nm CPUs and GPUs at their Computex 2018 keynote, though at this time it is unknown whether or not the company plans to discuss 7nm Vega or 7nm Navi graphics hardware at the event.

Given Nvidia's focus on the ultra-high-end with Turing, the idea of $250 mid-range products from AMD/Radeon is an appealing prospect, as this price range has been dominated by the Polaris-based RX 480/580 and Pascal-based GTX 1060 for over two years, with pricing remaining largely unchanged during that time. Delivering higher performance levels at this price point will help push PC gaming forward, especially in an era where consoles are starting to push game resolutions beyond 1080p.

You can join the discussion on AMD's Navi graphics cards reportedly running in AMD's hardware labs on the OC3D Forums.

demonking
Just in time for nvidia to sell off all their 10 series stock and drop the price of 20 series. Shame it won't be soonerQuote

Bartacus
"Better than expected", which means absolutely nothing if they had low expectations.

To be honest, this "Better than expected" attitude mirrors a lot of Vega's hype as well. I honestly hope it doesn't backfireQuote

Avet
I don't believe anything from Radeon Group. Vega was massive disappointment. And they keep failing over, and over. Until I see solid reviews from Tom and the gang I won't acknowledge their existence.Quote

Dicehunter
You have to remember this is a Polaris replacement and not a Vega replacement so keep expectations low.Quote
Reply