Vega reviews will be releasing soon, but they eyes of many are no doubt looking towards what comes next. Vega already sports a boat load of new features that Polaris lacks, from their new rasterization techniques, support for FP16 mixed compute "Rapid Packed Math, and the most comprehensive DirectX 12 support that we have ever seen in a GPU.
AMD's next generation GPU architecture is Navi, which will be designed for Globalfoundries' 7nm manufacturing process. Right now not much is known about this new GPU, though today there are rumours that AMD will be adding dedicated circuitry to better support artificial intelligence.

At this time it is unknown what this new circuitry could do, be it add additional ISA capabilities for AI calculations or add a whole new acceleration engine to the product which will act in a similar way to the Nvidia Tensor Cores that are present in their Volta V100 GPU.

With Navi being based on Globalfoundries' 7nm manufacturing process the earliest release date for the product will be in the second half of 2018, though this could easily be delayed if 7nm suffers from any major setbacks or AMD has difficulty producing products on the process node. 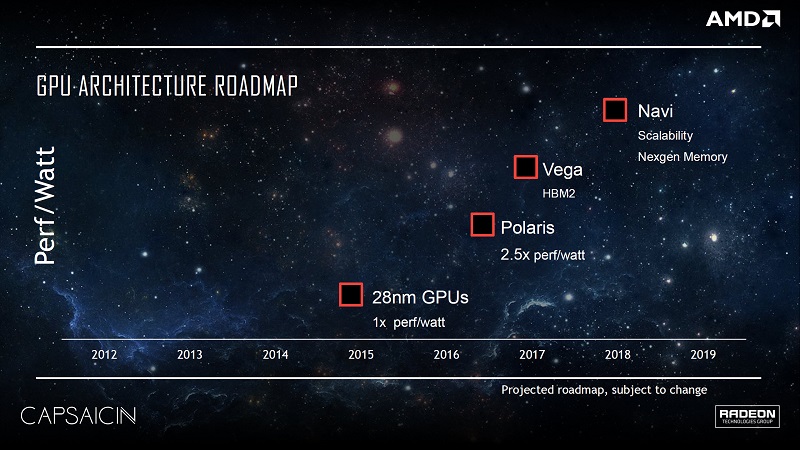 AMD's product roadmaps say that Vega is designed to use Next Generation memory and feature "scalability", though at this time it is unknown what exactly these features mean.

On AMD's lower-end product stack it is likely that AMD is planning to use GDDR6 memory, though at this time it is anyone's guess what the Radeon team has in store for us.

Scalability is another interesting piece of information, given Vega's use of AMD's Infinity Fabric tech. Is AMD planning on making Navi with multi-chip GPUs in mind? Could AMD create a Threadripper/EPYC style GPU with multiple smaller units?

Without any official information on Navi, it impossible to guess how it will perform and what unique features it will have.

You can join the discussion on AMD's Navi GPU architecture on the OC3D Forums.