AMD's Lisa Su Confirms that Navi will have "Launches" in 2019

The first launch could be in Q2!

AMD's Lisa Su Confirms that Navi will have "Launches" in 2019

During AMD's Q4 Earnings Call, the company's CEO, Lisa Su, uttered the magic words that Radeon enthusiasts have been waiting for for quite some time "Navi Launches".

For those who don't follow the PC gaming market closely, AMD's Navi graphics architecture is the company's successor to Vega, the core chip design which is used in many of AMD's latest GPU offerings. Navi is the first GPU architecture that was designed with 7nm in mind from the outset, and is expected to deliver a notable performance and efficiency leap over the company's existing Vega-based and Polaris-based offerings.

Sadly, AMD has been tightlipped about their Navi architecture, but early roadmaps used the words "scalability" and "Nextgen Memory" to describe what the new architecture would offer. Our best guess is that Navi will be designed to scale better to the high-end of the GPU market, possibly breaking past the 64 CU limit of AMD's Radeon Vega and older GCN designs, and utilise GDDR6 memory to cover the "Nextgen memory" section of the roadmap.

In AMD's earnings call, Lisa Su stated that AMD's GPU business would experience a "low point" in Q1 2019, but that things would improve in Q2 as the retail channel becomes less congested. Lisa Su also suggested that AMD would have "additional product launches", a comment which came immediately after Su's claims that AMD would see improved Q2 GPU sales. These claims are not necessarily linked.
Below is a comment from AMD's Lisa Su in response to a question from Ross Seymore from Deutsche Bank (transcript via Seeking Alpha).

... as we see the GPU business right now, we see the first quarter as the low point in the business with the channel getting improving as we go into the second quarter. And we have additional product launches there as well. So that's the way we would see the portfolio.

On the gaming side, Lisa Su also commented that their "gaming growth" in 2019 would be driven by their Radeon VII (Radeon 7) launch as well as "Navi Launches", confirming that several Navi graphics products are in the works.

Our gaming growth will be driven by new products. We would see that as we go through this year and with our Radeon 7 launch, as well as our Navi launches on the gaming side. 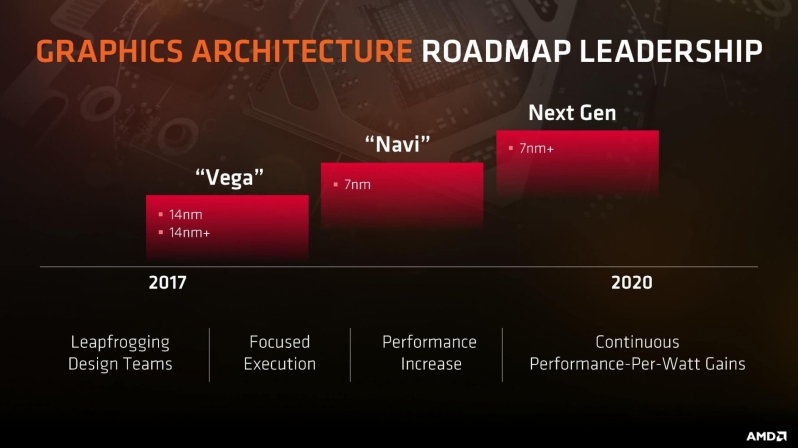 Today's rumours regarding Navi suggest that AMD's initial Navi offerings will be revealed/launched at or around Computex 2019, which takes place in late May/early June, suggesting a mid-late Q2 launch.

You can join the discussion on AMD's plans to release several Navi graphics cards on 2019 on the OC3D Forums.

Piskeante
since the best AMD has to offer is Radeon VII which is just 10-15% faster than Vega 64, and it struggles to get to the performance of an RTX 2080 which is also just like a GTX 1080ti , consider that Navi will not be a very good performer, but if the price is the correct one....well...

RX 590 cannot compete with this RTX 2060. The price is around 369$ (369 in Europe). So, unless we get a good AMD card in that range of price with comparable performance.....And i don't see AMD getting that. But we will see.Quote

So unless you can't live without RTX and BFV you'd be pretty crazy not to get the 56.Quote

g0ggles1994
Quote:
Not only that but depending on which shops you're looking at, you can pick up the RoG Vega64 for less than the RoG 2060. Given the choice, I'd have the Vega card any day of the week.Quote

When it dips to £299, like it has about five times. Seems OCUK like playing Peekaboo with the price lol.

The games? those are selling to other Vega owners for £50+. So that makes it nearly £100 cheaper than the 2060, if you decided to sacrifice the games.Quote

looz
The choice seems so obvious when you cherry pick a deal on Vega and consider the anthem or bfv code you get with 2060 worthless.Quote
Reply