AMD's CDNA architecture could be a huge success for Radeon

Later this year, AMD plans to launch its CDNA-powered Radeon graphics processors for the server market, offering customers an optimised architecture which has a separate genus from AMD's gaming-oriented RDNA products.

Within leaked slides, which come via AdoredTV, AMD's Radeon Instinct MI100 product will be able to deliver competitive performance to Nvidia's Ampere-powered A100 chips while shipping for a lower price.

What must be noted here is that AMD is claiming performance leadership within certain workloads, catering to the needs of a lot of high-cost markets. Within AMD's leaked slides contains details for eight-GPU and four-GPU systems, with AMD promising strong performance scaling up to 32 Radeon Instinct accelerator.

With the 4x MI100 system, FP32 performance levels are listed as 136 TFLOPs, giving each Radeon Instinct unit 34 TFLOPs of computational performance each. With a total of 128GB of HBM2 memory, each accelerator will feature 32GB of VRAM. That's strong performance from team Radeon. 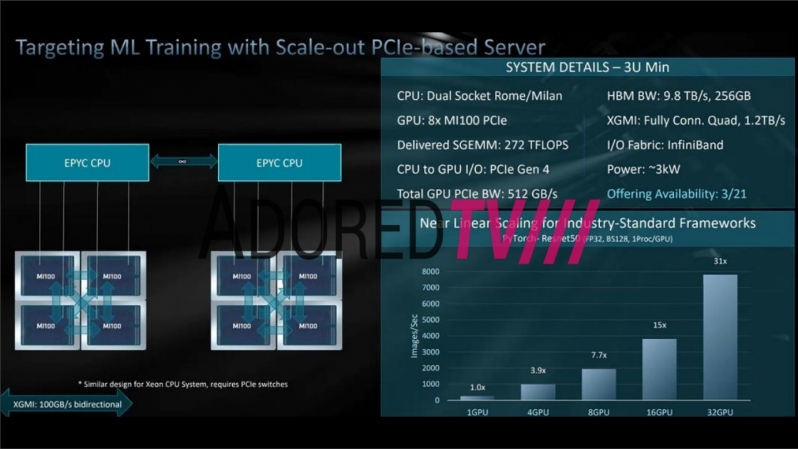 With CDNA, AMD plans to gain market share within the server market, and given the performance numbers listed here, it looks like AMD will be able to deliver strong products to its potential customers.

AMD's future plans with CDNA extend to exascale computing, with the company having already been selected to design several exascale systems for the US government. This makes CDNA critical to AMD's future success, as these exascale systems will require thousands of expensive graphics cards to function. 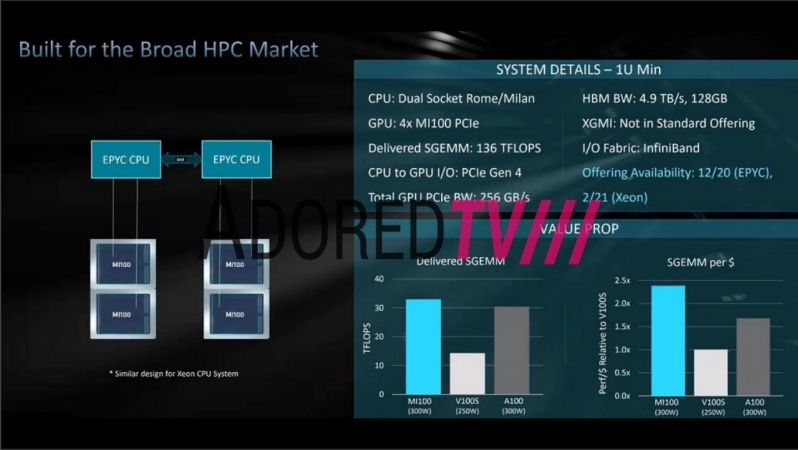 AMD's continued growth will rely on the company's expansion into new markets and the continued execution of their roadmap. CDNA will bring Radeon closer to Nvidia in terms of market addressability, and creating strong products for these markets will give AMD the revenue and resources that they need to fund new R&D developments.

AMD's CDNA products are due to launch in late 2020, with wider market availability being expected in early 2021.

You can join the discussion on AMD's CDNA accelerator leaks on the OC3D Forums.

Piskeante
If AMD does not solve the enormous drivers issues, this launch will be a total fail. It doesn't matter how good it will be, or how good price it has.
Noone will buy a card which drivers a total disaster.Quote

AlienALX
The drivers were fixed aaaages ago. They just got side tracked with the new consoles and etc.Quote

Tripp
Quote:
This was my thinking too, the only thing wrong with navigation and the drivers atm, is the underwhelming performance at h.264 encodingQuote

NeverBackDown
Just to be clear guys. This article is about CDNA, not RDNA. This is a professional care for non consumer markets. It'll have much more support and stability.Quote
Reply