For those that are unaware, DirectX 12 has several different feature levels, with each tier indicating support for select graphical features.
Today's Polaris-based GPUs support DirectX 12 level 12.0, which is lower than the level 12.1 that is supported by Nvidia's Maxwell and Pascal GPUs, though AMD does make up for this with better support for certain features like Async Compute.
Vega has been confirmed to support DirectX 12 level 12.1, offering support for higher feature levels than Polaris, and support for several features that even Nvidia's Maxwell architecture lacks.
Moving from Polaris to Vega AMD has been able to deliver support for Conservative Rasterisation Level 3, which is a huge jump for AMD who previously lacked support for Conservative Rasterisation. Nvidia's Pascal Architecture features Tier 2 support for this feature, giving AMD a lead here. 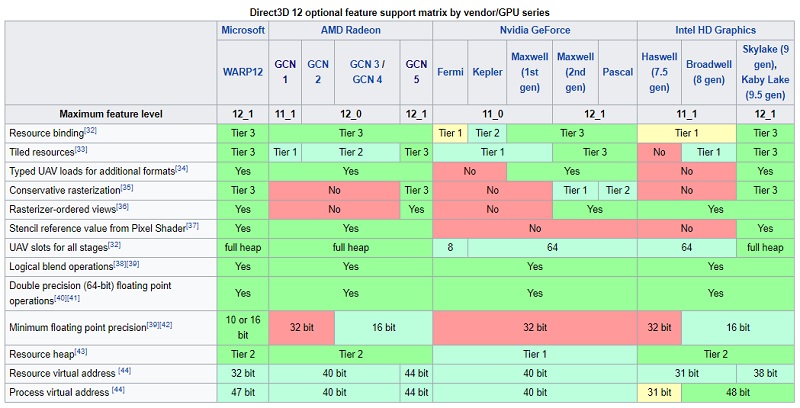 AMD has also enabled support for Raster-Ordered Views and Tiled Resources Level 3, which are both features that Nvidia has on their Pascal and Maxwell-based GPUs.

One other feature that AMD has implemented is support for lower minimum precision levels with DirectX 12, which will allow AMD to utilise 16-bit floating point precision calculation. This is a new feature that is currently present in the PS4 Pro, though it is unclear whether or not we will see this feature used by games in the near future.
Adding this new functionality will certainly help AMD in DirectX 12 titles moving forward and Vulkan if similar features advanced are available. Sadly this will not help AMD's RX Vega in DirectX 11 based applications, though it will certainly be a huge benefit for them moving forward.

You can join the discussion on AMD's RX Vega featuring DirectX 12 12.1 support on the OC3D Forums.
«Prev 1 2 Next»

NeverBackDown
Would expect nothing less than supporting all the latest featuresQuote

AlienALX
AMD - "we'll tell you one spec at a time"Quote

Dicehunter
Whether that amounts to anything remains to be seen.Quote

NeverBackDown
Quote:
It certainly will for DX12 games. Conservative Rasterization should benefit AMD greatly as it(as far I as understand it) allows them to do more culling. Culling being that they can get rid of things the player cannot see, which helps save rendering time. It does a lot more than that, but thats the little bit I understood. Tiled Resources am unsure about, since MS does not have tier 3 on there website, they only talk about tier 1 and 2. I think it has mostly to do with memory though as far as I can tell.Quote
Reply