A listing for AMD's RX 490 has appeared online alongside alleged benchmarks for AMD's Pro 490 GPU, which will be a low power professional version of the GPU.
For a long time now an AMD RX 490 has been teased, with many expecting the new GPU to be released in late 2016, now a release in that timeframe seems unlikely. The GPU is expected to target 4K resolution and come with a memory bus that is larger than 256-bit, though no further information is currently known.
Right now some Rumours suggest that the RX 490 will be a dual-GPU card, which will feature two RX 480 series GPUs, making this GPU an effective RX 480X2.

Right now we know that AMD will be hosting an event called New Horizon on December 13th at 9pm GMT, though it is unlikely that this event will double up as a launch event for the RX 490.

Now some alleged benchmarks for an AMD Pro 490 have leaked over at WCCFtech, though at this time we cannot verify the legitimacy of this leak. If the GPU tested in in fact an AMD 490 Pro it will likely feature lower GPU clocks than AMD's gaming oriented RX 490 GPU, like all other Radeon Pro 400 series GPUs.

In the graph below AMD's Pro 490 is shown to offer more performance than Nvidia's GTX 1070, with performance numbers that are very similar to what we have seen on GTX 1080 Founders Edition GPUs. 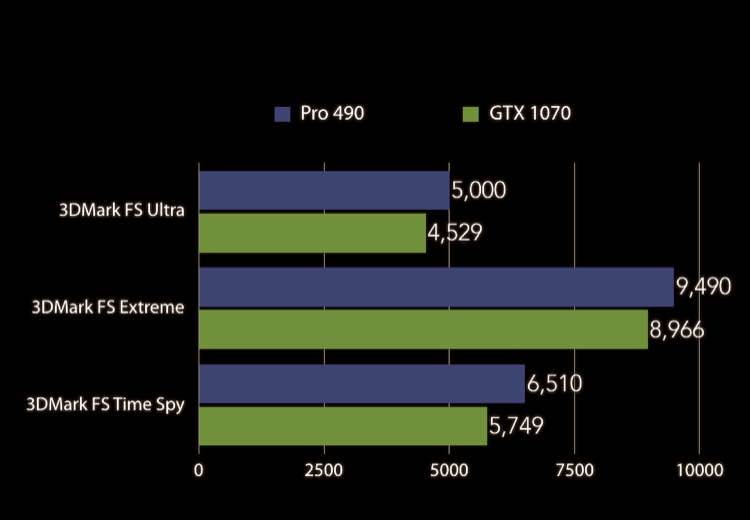 At this time the sources of these leaks cannot be verified, so all information here should be regarded with the utmost suspicion. If these leaks are correct AMD may just have given themselves a great opportunity to take back some GPU market share from Nvidia on the high-end of the market, especially if this "Pro 490" is running at lower clock speeds than the gaming variant.

You can join the discussion on AMD's RX 490 leaks on the OC3D Forums.

NeverBackDown
What's most impressive here if this is true, is those scores. Seeing how 3Dmark always biased towards Nvidia, for it to be that far ahead a 1070 is very good. If it matches a 1080 then it will for sure be a potent card. However with Vega around the corner, I'd rather wait for the Fury X.2 card as it will probably be betterQuote

AlienALX
Thing is those benchmarks are probably the only things it will work with properly.Quote

AngryGoldfish
Quote:
I agree. DX11 games that support Crossfire scaling, there are a few (SoM, GTA V, Tomb Raider 2013), but they all still favour nVidia in general. DX12 and Mantle is where AMD beats nVidia, but there is almost no DX12/Mantle Crossfire scaling at this time.Quote

AlienALX
It's just a stop gap until Vega IMO. I reckon normally they would not have released this at all but they need a product to plug the gap.

Hopefully I am completely wrong and it's actually Vega but I can't see it. No doubt this will be the benchmark king but games? forget it.

It is odd though. I mean, they launched the Fury Duo thing and made it very clear it was for professionals and not gamers, now they are going to release a dual GPU card that works just as badly?

dwatterworth
If this is indeed a dual GPU pro card, that would be an interesting move.
Seems like a large amount of professional applications don't take advantage of a second GPU right now.
I've had mixed luck with larger A&E models with multi-GPU, but usually the implementation is fairly frustrating.
Definitely waiting for the single large GPU solution from AMD or better support in DX12 throughout a majority of titles.

I haven't ever owned a dual GPU card, I wonder if you can select each core in an application vs the usual actual card.Quote
Reply