Several AMD RX 480 GPUs have been successfully flashed with RX 580 BIOS files, effectively allowing updated RX 480 GPUs to run with the enhanced clock speeds of the RX 580.
This was first done by a user of the Techpowerup Forums called TonybonJoby, who used a Sapphite RX 580 BIOS to "upgrade" his XFX RX 480, allowing his GPU to achieve the same clock speeds as the Sapphire model (1411MHz). Right now the GPU is reportedly stable, though at this time it is unknown if this GPU's lifespan will be negatively impacted by the upgrade. 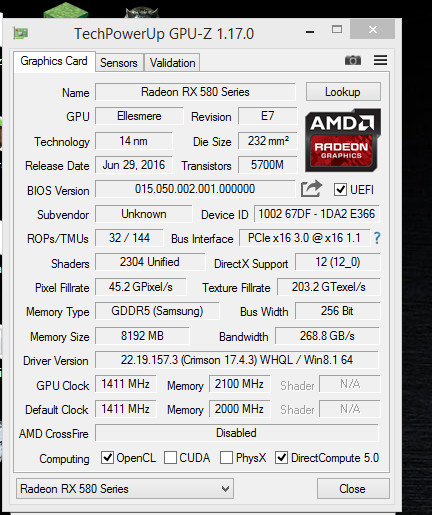 BIOS upgrades like this are unsurprising, as AMD themselves have admitted that the RX 580 is powered by the same GPU as the RX 480, with the only change being increased clock speeds thanks to improved manufacturing techniques. There is no guarantee that an RX 480 will BIOS flash to an RX 580, making this performance-boosting BIOS update a risky process.

Some are saying today that this proves that the RX 480 was "limited", but this shows a clear lack of understanding from some members of the gaming press. We have seen this before with previous refreshes, like the HD 7970 GHz Edition or the R9 280X.

What needs to be understood here is that many new RX 580 models come with enhanced coolers and beefier power circuitry, with the GPUs likely using higher voltages/power profiles to achieve higher clocks combined with manufacturing improvements. RX 480 GPUs that have been "boosted" using RX 580 BIOS files will likely run much hotter and with more power draw than before, which is something that is worth considering depending on your GPU's cooling solution.

Essentially all flashing the bios is doing is overclocking your card without the need for using a software tool like Afterburner. It's really not the huge news that click-baity sites are trying to make it out to be.

You can join the discussion on AMD's RX 480 GPUs being usable with RX 580 BIOS files on the OC3D Forums.

AngryGoldfish
So the new process is really not that unique? Well, that's a bummer. I really think these new cards should have been the same price.Quote

WYP
Quote:
Not necessarily, it is hard to know if most cards would be stable or how much more power these "boosted" RX 480 GPUs will draw when compared to normal RX 580s.

This is effectively a BIOS overclock, and with most of these new RX 580 GPUs coming with enhanced coolers it is likely that these "boosted" cards will run ver hot.Quote

AngryGoldfish
I was referring more to the stability. Flashing a GPU using the old process to a newer process could cause bricking, but that's not happened here. The principle of whether the technology process has changed enough to warrant that is a little disappointing in that the new process was touted as being fresh and integral to the future of the Polaris range, but if the old cards can work with the new BIOS' then the process is very, very similar, at least from an outsiders perspective.Quote
Reply