What are your thoughts on AMD's reference RX 6000 design

AMD has officially unveiled its first image of a Radeon RX 6000 series graphics cards, giving us a glance at what could become the company's upcoming Radeon flagship.

Based on this design, it is clear that AMD is taking the cooling of its upcoming Radeon flagship seriously. We can see this graphics card is cooled using a triple fan heatsink and will be powered by dual 6+2-pin PCIe power connectors. In many ways, this graphics card is similar in appearance to Nvidia's RTX 2000 Founders Edition designs, albeit with a triple-fan cooler which closely matches Radeon's branding better.

Unlike AMD's older reference designs, these new graphics cards appear to be combined with cooling solutions which will be more than up for the task of cooling AMD's new Radeon flagship. This reveal should come as great news to GPU enthusiasts, as Radeon fans should not need to wait for 3rd party designs before they can purchase graphics cards which offer cool and quiet heatsink options.

By using dual 6+2-pin PCIe power connectors, AMD has committed itself consuming 300 watts of power from your power supply and up to 75W from your PCIe slot. At this time it is unknown how much power AMD's RX 6000 series flagship will consume under load.

PC gamers will be able to get a closer look at this cooler design in Fortnite using the Creative Island code 8651-9841-1639. 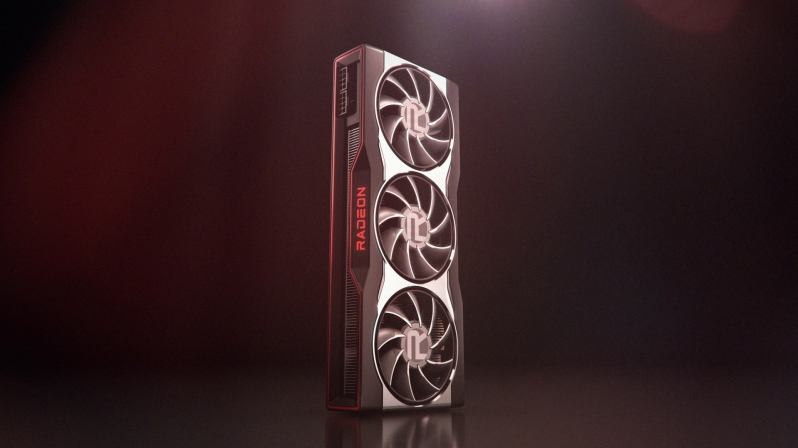 You can join the discussion on AMD's Radeon RX 6000 graphics card teaser on the OC3D Forums.

It was the lack of power on the engineering board why I thought it wasn't Navi 21 but more likely 22/23.

This thou I can live with it at least has some decent cooling, thou not a fan of red on hardware since my set up is black and blue so it's something i'd want changed out for an AIB like sapphire card or similar unless it's changeable

AngryGoldfish
Very nice design; like something Sapphire would do, just with more red and R's.Quote

Avet
Looks very nice. I like it.
The 150W from 8-pin is outdated. Ancient PSUs made that limit. 8-pin can carry ~400W. This is an elaborate explanation from some form i can't remember:

looz
Ok so how does one fasten it to a computer case?Quote
Reply