PC gamers and developers alike have been eagerly anticipating the release of AMD's Vega architecture, though sadly AMD's latest graphical architecture has been delayed significantly, with the gaming-oriented RX Vega being expected to launch in late July.

Now AMD's first Radeon Vega GPU has been released to the public, the Radeon Vega Frontier Edition, which sports compute performance levels of 13.1 TFLOPs and  16GB of HBM2 memory.

This new GPU is designed for developers, though the GPU will sport a "Gaming Mode", though it is expected that the Radeon RX Vega will offer increased gaming performance thanks to a specific, gaming-oriented drivers.

To playtest and optimize the gaming experience, the exclusive ability of the Radeon Vega Frontier Edition to switch from Radeon™ Pro Settings to Radeon Settings and back with a couple of clicks enables rapid switching between software features for faster iteration during development workflows.

When in “Gaming Mode” the full suite of gaming features of Radeon™ Software are made available, including Radeon Chill 5 and Radeon WattMan 6.

Game developers can also use the wealth of no-cost open development tools and software found on GPUOpen.com to optimize their next-generation gaming experiences for the pinnacle of AMD graphics technology.

The Radeon Vega Frontier Edition also comes with a cheaper price than was originally anticipated, with early listings of these GPUS coming with $1,199 and $1,799 for the air cooled and water cooled versions of these GPUs. 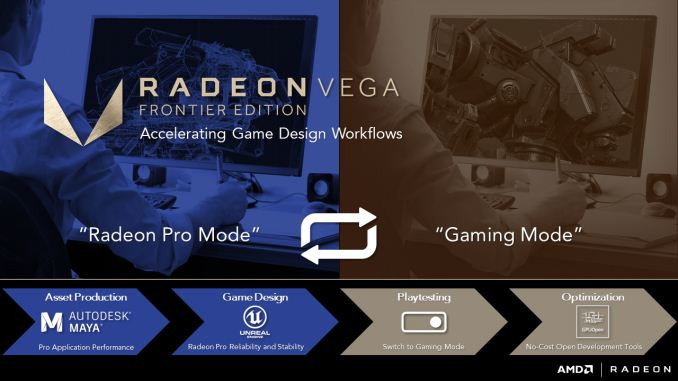 These new GPUs are designed for professional workloads, with the air cooled version coming with similar pricing to Nvidia's GTX Titan Xp while offering more performance in a range of applications.

Sadly AMD has not sampled these new GPUs to reviewers, as it is feared that the media will claim that this GPU represents the performance of the RX Vega, which is expected to come with a different driver set and performance characteristics.

At this time the gaming performance of AMD's RX Vega cannot even be guessed at, given the huge changes in AMD's GPU architecture since Polaris and potential changes to AMD's Radeon Software GPU drivers.

You can join the discussion on AMD's Radeon Vega Frontier Edition on the OC3D Forums.

To show that it wasn’t just an API advantage, AMD let us play Doom using Vulkan, Prey using DirectX 11, and Sniper Elite 4 using DirectX 12. All of the games were set to their highest game settings, and we played at the native resolution of the panels. Although the identical panels were FreeSync-based, FreeSync was switched off on the AMD GPU.

Switching back and forth between the two systems, we’d be hard pressed to tell the difference between the Titan Xp and the Radeon Vega Frontier Edition. While you'd expect such performance from a $1,000 card, many have been concerned that Vega just won’t perform.

How vague can you possibly be?

I think it's going to be a bit crap.Quote

Type-8
Quote:
I think you're reading into that article a tad too much. I can understand why AMD would be reluctant to give out specific gaming benchmarks on a card not designed for gaming.

You know how fickle people can be. AMD releasing gaming benchmarks for their Prosumer card would do them nothing but harm. Lets suppose that they did release benchmarks for it, and lets suppose that those benchmarks were identical to the Titan Xp (stress on the if, it wouldn't be) then what far too many people would take out of it is "Vega costs $1499 and performs worse than a 1080Ti". Or, people would say "Vega costs more than a Titan Xp for the same performance", and ignore that it beats it in areas its actually designed for, which isn't gaming. Basically, they can't win. Better to just hold off completely until the consumer version drops, then release benchmarks for that.Quote

AlienALX
Quote:
I'm not reading too much into it. AMD have been secretive with Vega's performance since day one. Every time they have showed it they have deliberately obscured pretty much everything to hide the performance. Why? most probably because it's crap.

A couple of days ago I saw a video of the FE and the only game they ran was Doom using Vulkan. The AMD rep was standing there and the guy said the same crap "Performance is great I can't tell the difference between this and a 1080TI !!".

That is what AMD are telling people to say. Just like when they said "Vega performance is nice!" erm excuse me? WTF. "Nice"... Really?

Trust me now, if Vega was amazing they would have leaked like a forking sieve. We would know just how good it is, and we would be sitting here waiting for it.

So no, I politely put across that I am not reading too much into it, because AMD have made damn sure there's nothing to read.

Just got a bonus, I am almost tempted to order a FE and DSR it after going over the performance...Quote