AMD has released a new variant of their Radeon RX 580 graphics card, as SP series variant that appears to be exclusive to the Chinese market. This new model is called the RX 580 2048SP, offering purchasers lower core clock speeds, fewer active CUs and a reduction in memory clock speed from 8Gbps to 7Gbps.

Strangely, this new GPU is more similar to the RX 570 than it is to the RX 580, offering identical memory clock speeds and the same stream processor count, offering users a minor bump in base/boost clock speeds and a TDP of 150W. At this time it seems likely that this new SKU will not be available outside of the Chinese market.

In many ways, this seems similar to Nvidia's GTX 1060 3GB, offering end-users a reduced core count and reduced performance when compared to fully featured counterparts, though at least AMD has added the "2048SP" suffix to their RX 580 to help keep consumers informed about the SKU's hardware changes. 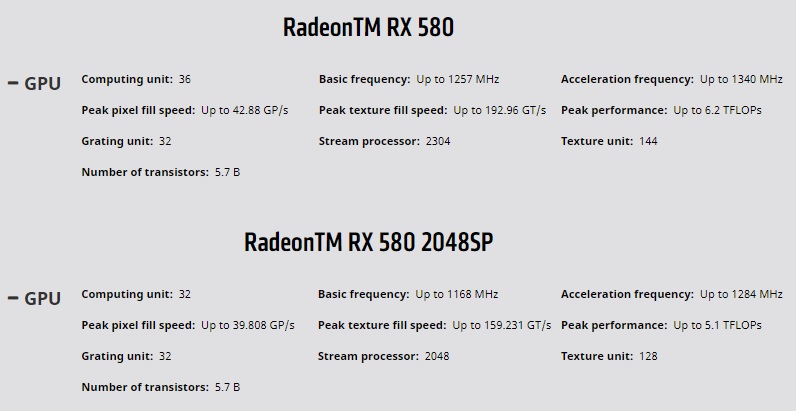 China-exclusive product SKUs are not uncommon in the graphics card market, with Nvidia releasing a 5GB GTX 1060 graphics card in China in late 2017.

RobM
that seems like a rather pointless card to release.Quote

Kourgath223
Quote:
Its China only right now and will probably stay that way. Plus this card is probably for those internet cafes that are apparently really popular in Asia.Quote

CaTcHmG
And when they cut that slither from the silicon & it just don't quite make the cut to compute ...IT DOES NOW introducing the..

Avet
Quote:
Yea Nvidia has 5GB version of 1060 that is sold in bulk, and in China. I wouldn't blame AMD for wanting that piece of cake.Quote
Reply