AMD has refreshed their Q1 CPU offerings, offering New CPUs, APUs and Cooler designs, many of which offer lower TDPs and thermal outputs.

We will start off with some of the newest offerings for the FM2+ socket, which will be offering a selection on CPUs and APUs for the platform, firstly there will be the A10-7860K, which will be an unlocked CPU that offers almost the same speeds as a A10-7850K (lower base CPU clock and higher GPU clock) but at a lower TDP of 65W, rather than 95W. This APU will be coming with AMD's new quieter 95W cooler design, giving this GPUs users a much better acoustic experience.

The most interesting CPU below is the Athlon X4 845, which will be using AMD Excavator core design, though it will also have some highly significant drawbacks, like lover clock speeds than the older steamroller based Athlon 860K and a mere 2MB of L2 cache and only X8 PCIe 3.0 lanes. 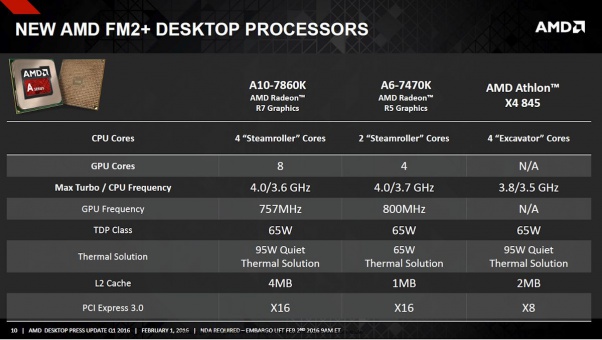 The AMD AM3+ and FM2+ platforms are not dead, with many new motherboard options coming with M.2 SSD connections and USB 3.1, though the AM3+ chipset will be limited to PCI-2.0 bandwidth, which will greatly limit the maximum speeds of your connected SSDs.

Both the AMD AM3+ FX and AMD FM2+ motherboards may see an increase in sales as AMD reduces the prices of their existing CPUs and APUs further and adds newer versions with upgraded cooling to the lineup, hopefully tiding the market over until they can release their new Zen based CPUs. 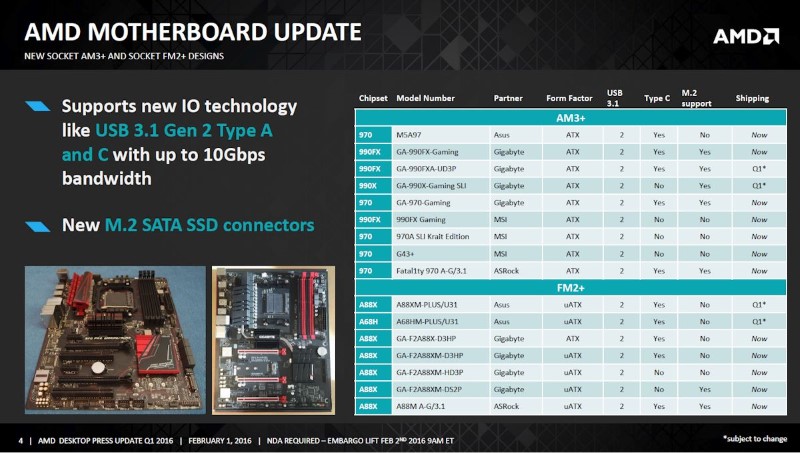 One of the main changes coming to AMD's CPU refresh is big changes to their stock coolers, with the AMD Wraith 125w cooler leading the way with a design that has 24% more fin surface area and 34% more fan airflow while generating a mere 10% of the noise.

AMD will also be bringing new cooler designs to their lower TDP offerings, offering quieter operation than the cooler they are replacing and full compatibility with AMD motherboards. 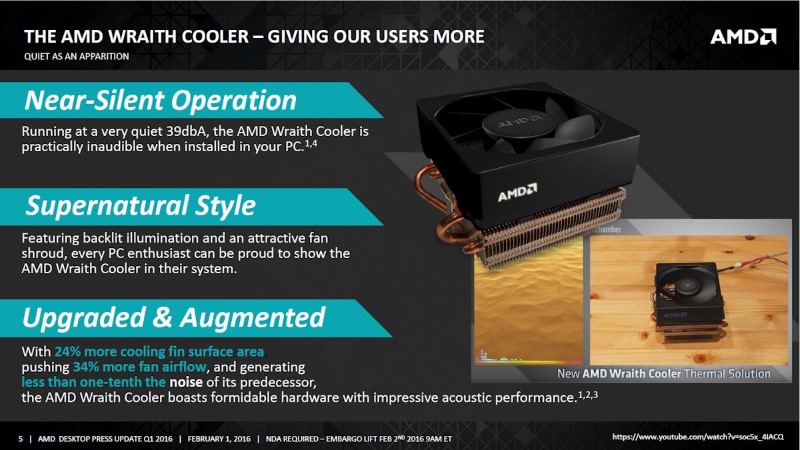 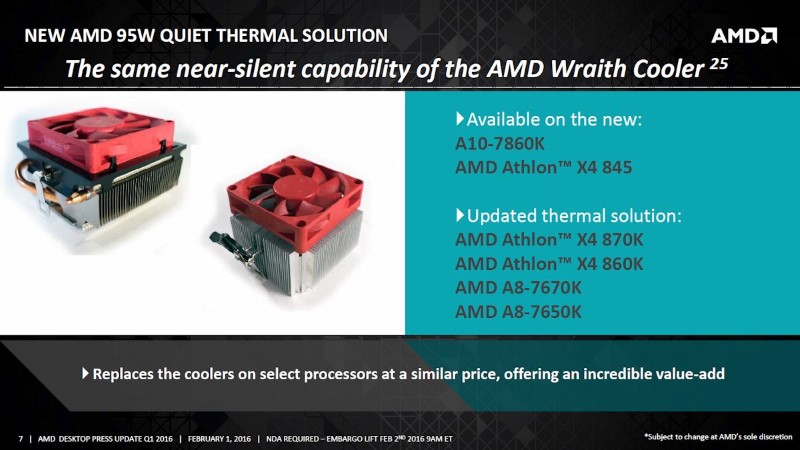 AMD is also lowering the prices of a wide range of their products, though sadly I have yet to find updated UK pricing. It looks like AMD are looking to clear their stock of older CPUs and APUs before the launch of their new Zen CPUs, which will no doubt be one of the most highly anticipated products of 2016. 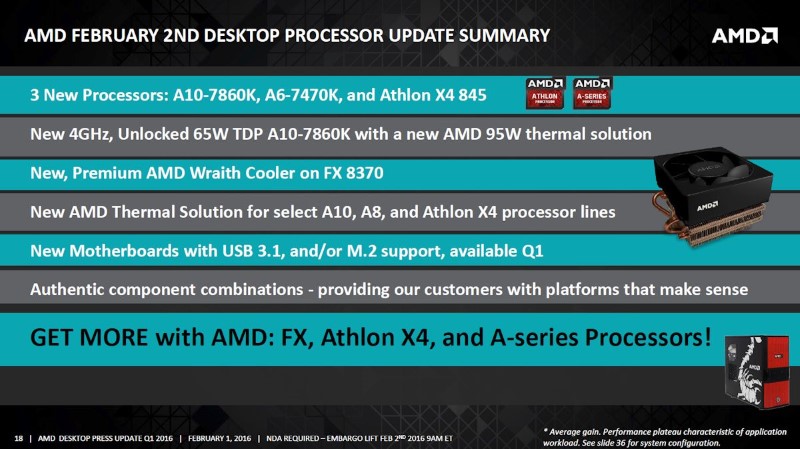 The most interesting products in this list are the new FM2+ offering, bringing us a CPU using the Excavator architecture and all new low watt versions of their Kaveri/Godavari APUs. The FX-8370 Wraith is also an interesting product, as I would love to see AMD's newest cooler design for myself and have and check AMD's claims of "silent operation".

You can join the discussion on AMD's refreshed Q1 2016 CPU and APU lineups on the OC3D Forums.

AlienALX
A nice try, but you'd be pretty crazy to go with any AMD CPU atm.Quote

Nothing AMD make at the moment is even Remotely worth spending money on.

I hope "Zen" is a return to *Good* and *PROPER* AMD CPUs.Quote

AlienALX
Quote:
The APUs still serve a purpose if you are looking for something to game very mildly on but anything more strenuous nowadays will leave you wanting.

Zen will have a much stronger GPU portion I feel so yeah, waiting is probably sensible.Quote

m2geek
Quote:
Mmm - I haven't had a AMD CPU since the Phenom X4 I had ages ago. Been Nothing but Intel/NVidia since.Quote