Don't worry, all of these GPUs are low-end

While AMD is focusing on its new Radeon Navi 5700 series on the high-end, OEMs feel that they need a new lineup of low-end graphics products to help push their latest PCs and notebooks.

OEMs need low-end products, and they don't mind if they use the latest and greatest silicon from team Radeon. With this in mind, it makes sense for AMD to rebadge its existing products with a new name and no significant changes. This is exactly what AMD has done with the Radeon 600 series, rebadging not just Polaris-based products, but older GCN 3 and GCN 1 products as well.

From AMD's perspective, this makes sense. Why spend the time, money and effort to create an entirely new ultra-low-end product lineup when relabelling their older offerings accomplishes the same goal? When a Radeon RX 570 can be found for as little as £100, it makes no sense for AMD to make something new for these OEM exclusive parts. OEMs want a rebrand/refresh to appear newer, and that's what AMD is providing.

So what does this mean for consumers? Nothing really, if you care about gaming, these graphics cards are likely too low-end for you, assuming that you are interested in AAA releases and not just free-to-play MOBA titles. These graphics products are those which AMD is unlikely to replace with new silicon anytime soon. 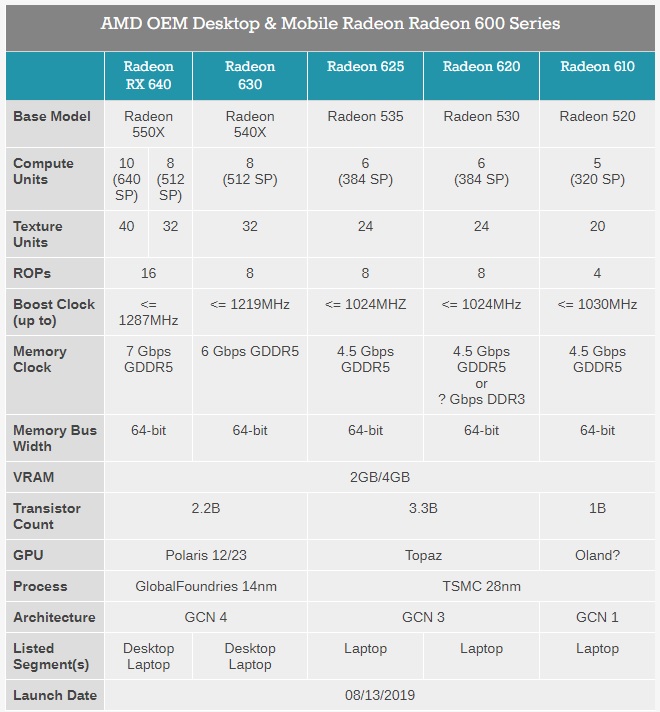 While some consumers will be sick of seeing AMD product rebrands, it is worth remembering that AMD has a limited budget and should only create new products that target markets with a large consumer base or high margins. These low-end OEM parts are not worth the effort and money that's required to make new silicon.

You can join the discussion on AMD rebranding Radeon 500 series GPUs as new Radeon 600 series SKUs on the OC3D Forums.

demonking
This just shows how silly the industry is.
OEM's: we need a new GPU we can't sell these old 500 series cards anymore
AMD: OK here how about these brand new 600 series cards
OEM's: perfect a new generation, our customers don't not want to buy last gens tech....Quote

tgrech
It's for the summer back to school refresh period, like the HD8000 series, OEMs don't want to look like they havn't changed things after a year.Quote
Reply