AMD's Radeon Navi architecture will succeed the company's existing Vega designs, delivering what is expected to be a considerable performance boost. This boost will come thanks to AMD's use of 7nm lithography and design changes to the Navi architecture itself.

Four Navi graphics cards are named, Navi 16, Navi 12, Navi 10 and Navi 9 (via TonyMacx86), all of which are likely to be unique product variants, rather than four individual pieces of silicon, referring to the use of 16, 12, 10 and 9 Compute Units. If this is correct, the high-end model, Navi 16, will act as a direct replacement for AMD's Polaris 11 silicon, which also offers sixteen compute units.

Similar references to AMD's Vega architecture were uncovered within six months of the graphics card's mainstream release, making the rumours that AMD's Navi series of graphics cards releasing in June seem all the more plausible. AMD has stated that we should expect to "hear more about Navi in 2019". 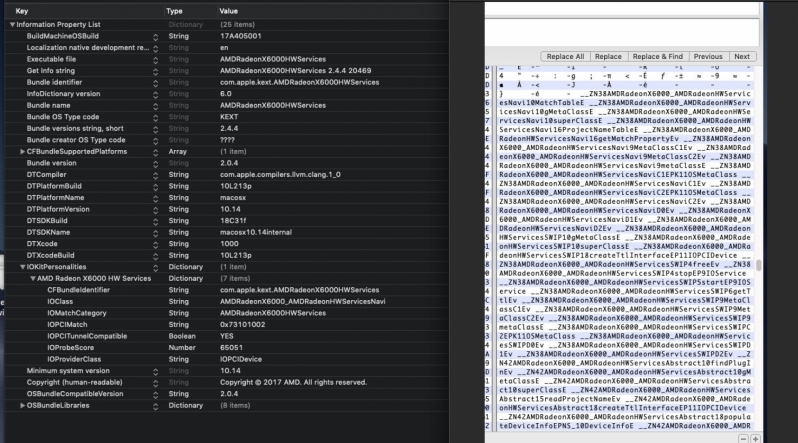 If these numbered Navi GPU designs are referencing Compute unit counts, it is likely that these Navi series graphics cards will be used in Apple's future mobile MacBook systems, as lower numbers of compute units will be beneficial for users in a power-constrained mobile computing environment. That said, it is also possible that these codenames could be references to other aspects of AMD's Navi graphics architecture.

You can join the discussion on AMD's Navi 16, Navi 12, Navi 10 and Navi 9 graphics cards appearing in MacOS on the OC3D Forums.

tgrech
I think CU counts for MacBooks is definitely most likely, given current MacBooks top out with the 16CU 35W Pro560X it'd fit in neatly, and their iMac Pro's and the like go upto Vega atm iirc, I guess Navi's launch will be almost exactly 3 years after Polaris and these are looking like direct slot in replacements.Quote

g0ggles1994
I hope Apple adopts Navi as their go to GPU in their hardware. Hell, I'd even go as far as hoping they might adopt Ryzen 3000 as well. Taking them from Intel would be a hell of win for AMD.Quote

tgrech
Apple have used AMD as their exclusive dGPU manufacturer for over half a decade iirc, around the time the Mac pro dust bin launched, some modern iMac's have Vega based solutions I think, and iirc the R9 285(Earliest desktop revision of the later R9 380) technically launched first in MacBook Pro's, so there's some precedent for Apple being early adopters of AMD GPUs too. Oh, and VegaM is exclusively in Macs atm besides Intel's Hades Canyon G with VegaM chip.

I don't see them ditching Intel though, given they're entirely dependant on Intel's 5G modems to have any chance of 5G support in their mobile devices, gives they've burned all their bridges with Qualcomm, who has been essentially guaranteed to dominate the 5G space with their IP advantage for a while and have hardware in market much earlier. I can't see them switching from Intel chipsets in any of their electronics to be honest.Quote

Watch this space, around 2020 for an official announcement I reckon....Quote

Apparently Apple and Nvidia fell out in a big way... It was caused by this.