AMD's R7 370 GPU has been pictured, confirming that the GPU will be a R9 270 rebrand and will not feature AMD's GCN 1.2 architecture.

As you can see from the picture below AMD have a new Stock cooler design, at least in terms of visual appearance.  Looking at the GPU we can see that it has a single Crossfire finger, meaning that it doesn't have the ability to use XDMA Crossfire, a feature of AMD's newer GCN GPUs, confirming that this GPU is using GCN 1.0 silicon and a Pitcairn based rebrand.

With most of their new GPU lineup being based on older silicon, AMD loses the ability to add any of it's newer GCN features to the GPU lineup, including higher levels of DirectX 12 support, XDMX (Bridgeless) Crossfire, Full FreeSync support and even use the tessellation benefits of GCN 1.2 architecture. 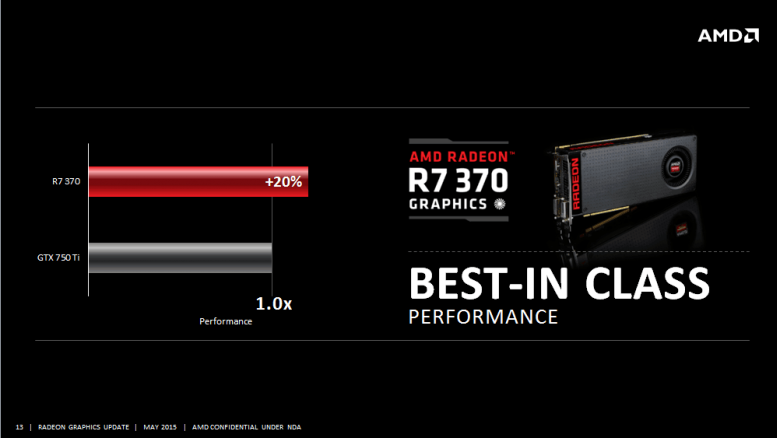 Without this updated feature set AMD is simply not bringing anything that is beneficial to GPU buyer over their older stock, aside from a potential bump in clock speeds or a decreased price. This gives Nvidia a huge chance to increase their market share further this generations with their lineup of GPUs which are based on entirely new silicon which is using a more power efficient architecture than AMD.

You can join the discussion on the AMD R7 370 on the OC3D Forums.

sixdean
It's no surprise that AMD have re-branded the old cards and I'm actually loving this new "Mostly black with some red and silver" and also the rubberised shroud look, But! and this is a big but, why the bloody hell have they stuck with the ancient blower fan that has been on cards dating back to the neolithic times. Am I right in saying then that there is only going to be one actual new card "The Fury" or am I missing something?

Wraith
Quote:
No one knows for sure (100%).. all there is to go on is "leaked" images, deconstructed driver code and speculation. Knowing AMD this is possibly all just marketing spoof to get tongues wagging.

So saying yes to anything would be just wrong.Quote

mazty
Quote:
I think it would be very, very charitable to think all the bad news being leaked is just an elaborate hoax because it is bad press, not good press - leaked benchmarks of some super chip would make a lot more sense.Quote

Dawelio
Quote:
But then as Wraith says, how can we know for 100% certainty?... "Leaked" benchmarks etc, they are leaked. Doesn't mean they are valid or the ones that will be launched, is it?.Quote
Reply