At their 2022 Financial Analysts Day, AMD made some big promises for the GPU market. AMD has claimed that their new 5nm RDNA 3 GPU architecture will deliver a 50+% performance-per-watt uplift over today's RDNA 2 GPUs. That means only one thing, that AMD's next-generation GPUs are going to be VERY powerful.

Assuming that AMD will keep the power limits of their RX 7000 series RDNA 3 GPUs the same as their RDNA 2 models, that means that AMD's next-generation flagship will offer users 50+% performance gains in most gaming workloads. If AMD increases their flagship GPU's TDP, even larger performance gains should be expected. If this is true, RDNA 3 will be a game-changing architecture for AMD.

With RDNA 3, AMD will be moving from TSMC's 7nm lithography node to an unnamed 5nm lithography node. Beyond that, AMD will be using an "advanced chiplet package" to make their next-generation flagship more cost-effective than a monolithic GPU design. With RDNA 3, AMD's bringing the cost benefits of chiplets to the GPU market. Chiplets is a core aspect of AMD's success with Ryzen, so seeing Radeon move to chiplet-based GPU designs is a great thing to see.

RDNA 3 will also double-down on AMD's Infinity Cache technology, a technology that AMD pioneered with their RDNA 2 graphics cards. What this change means remains to be seen, but the good news for gamers is that Infinity Cache is effectively an anti-crypto-mining technology, as Infinity Cache allows AMD to achieve higher performance levels with a smaller memory bus, and most cryptocurrency mining operations are very bandwidth-limited and are too large for GPU caches. 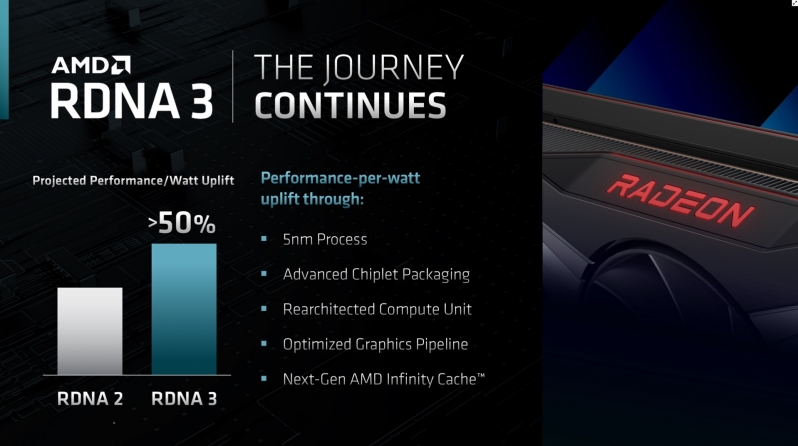 During their Financial Analyst Day, AMD also discussed support for AVI encoding and support for DisplayPort 2.0. If AMD can deliver on their 50+% performance per watt claims with RDNA 3, it looks like AMD's next-generation graphics cards will be performance monsters. AMD plans to deliver more performance with their GPUs without increasing your power bill.

You can join the discussion on AMD's RDNA 3 GPU architecture on the OC3D Forums.

Dicehunter
So around 30% increase in total performance in real world games and applications then.Quote

AlienALX
I have heard a few rumours that compared to 6000 series these are going to suck front bottoms.

It remains to be seen obviously, but with the total collapse of mining and GPUs selling in droves on Ebay they are going to really struggle now. I can pick up a 3090 FE for about £900 now, so they are going to have to undercut the absolute swamps of GPUs that are becoming available.Quote

Bagpuss
Until they get their crappy Ray Tracing performance up to (at least) Nvidia standards, I won't even consider an AMD card any-more.Quote

AlienALX
Quote:
From what I'm hearing there's something better coming in UE5. Was reading about it last night. will find it when I'm more awake. Very late night.Quote
Reply