AMD's Polaris 10 engineering sample has been pictured and shown running Hitman at Ultra Settings at a constant 60+ FPS at 1440p, which is an impressive feat given that in our testing the the R9 Fury X was not even able to average 60FPS at these settings.

Sadly AMD was keeping details about the Polaris 10 PCB and design secret, meaning that pictures could only be taken from the outside of the PC, but it still shows us that AMD has upgraded the display outputs  their new Polaris 10 GPUs and including a DVI output.

It has also been reported that AMD's Polaris 11 GPU, a lower end Polaris GPU design, has been shown running passively while playing 4K VR content, which is a very impressive feat. 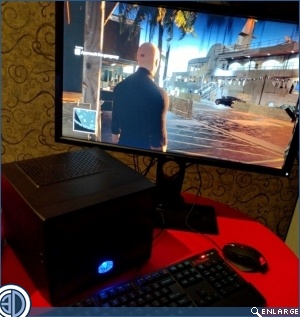 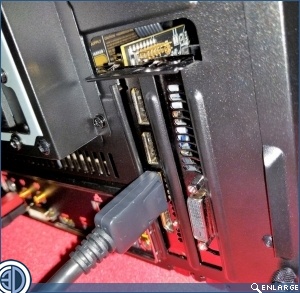 The PCB of AMD's Polaris 10 GPU is said to be very similar in size to AMD's Fury Nano, meaning that AMD is likely pushing for a compact design for their future reference high end GPU designs. Right now it remains unclear if Polaris 10 is intended to replace AMD's Fiji GPUs, or take a lower position in AMD's upcoming product stack.

In terms of display outputs AMD's Polaris GPUs are a significant upgrade from Fiji, supporting  3x DisplayPort 1.3, HDMI 2.0 and even a DVI cable (something that was missing from reference Fiji GPU designs). 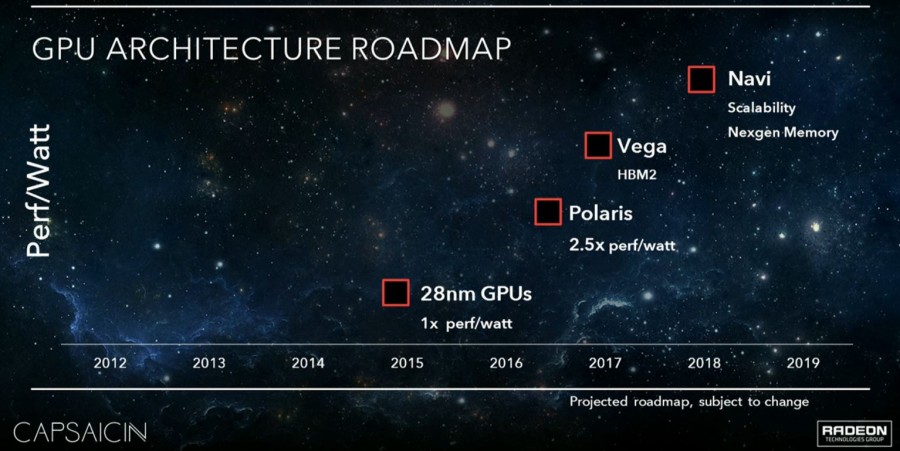 In an interview with PCPER AMD's Raja Koduri, the head of the Radeon Technologies Group was unable to confirm or deny that this is the case, suggesting that AMD Polaris GPUs will be using this older, first generation HBM memory standard rather than newer HBM 2.0 memory.

It is expected that AMD will be saving a lot of money by using HBM 1 in Polaris, allowing them to work from the same design and memory pipeline that the used in Fiji and recoup some more of the development costs of implementing HBM with another new generation of HBM GPUs.

With AMD's Polaris Architecture promising a 2.5x improvement in performance per Watt AMD is setting themselves into a great position to be able to provide cool running and low power GPUs that will help them gain more traction in the mobile and OEM desktop markets. Hopefully AMD's upcoming Zen CPUs will be able to deliver equally impressive efficiency on the new 14nm FinFET process.

You can join the discussion on AMD's Polaris GPUs on the OC3D Forums.

xnax2802
A card running passively while pumping out 4K content??? Burn the witch!!Quote

jimma47
Nice. Looking forward to the next 6-12 months for some pretty sweet releases.

I could be reading too much into it but that sounds like video not a game. Does that mean anything? Maybe - maybe not. I would think that playback would be less taxing than actually rendering it in game. I'm not sure how these things work though. Food for thought.

Still keen as for Polaris. I really hope it's good enough to keep AMD in the market.Quote

Killmeplsok
Quote:
It may be just video playback, but my Asus Strix 970 which has the 0db tech starts ramping up its fans few minutes after i starts playing 4k videos everytime.

Didn't test much though as 4k contents are not exactly majority and are pretty hard to come by.Quote
Reply