Industry sources have allegedly revealed some of the specifications of AMD's upcoming Polaris GPUs to Techpowerup, telling the site how many compute units that each GPU has and their max rated TDP.

The source claimed that AMD would be releasing one performance segment and one mainstream segment GPU, saying that AMD will be delivering a chip with 32 Compute units and offer 5.5TFLOPs of GPU performance at a TDP of less than 150W. This means that this GPU will deliver around the same compute performance as AMD's Hawaii-based R9 290W, with half the TDP.

Right now we do not have precise details on AMD's Polaris architecture, but if each CU (Compute Unit) continues to have 64 GCN GPU cores/Stream processors "Ellesmere"/"Polaris 10" will have a total of 2048 Stream processors. With a TDP of 150W this GPU will be able to be powered with just a single 6-pin power connector.

One thing to consider when comparing these specifications is that Single precision compute performance does not always scale perfectly with GPU performance in games. One example of this is that AMD's R9 290X and Nvidia's GTX 980Ti both have SP compute performance of 5.6 TFLOPs or so. With this in mind do not simply write Polaris 10 off as a low power version of Hawaii. 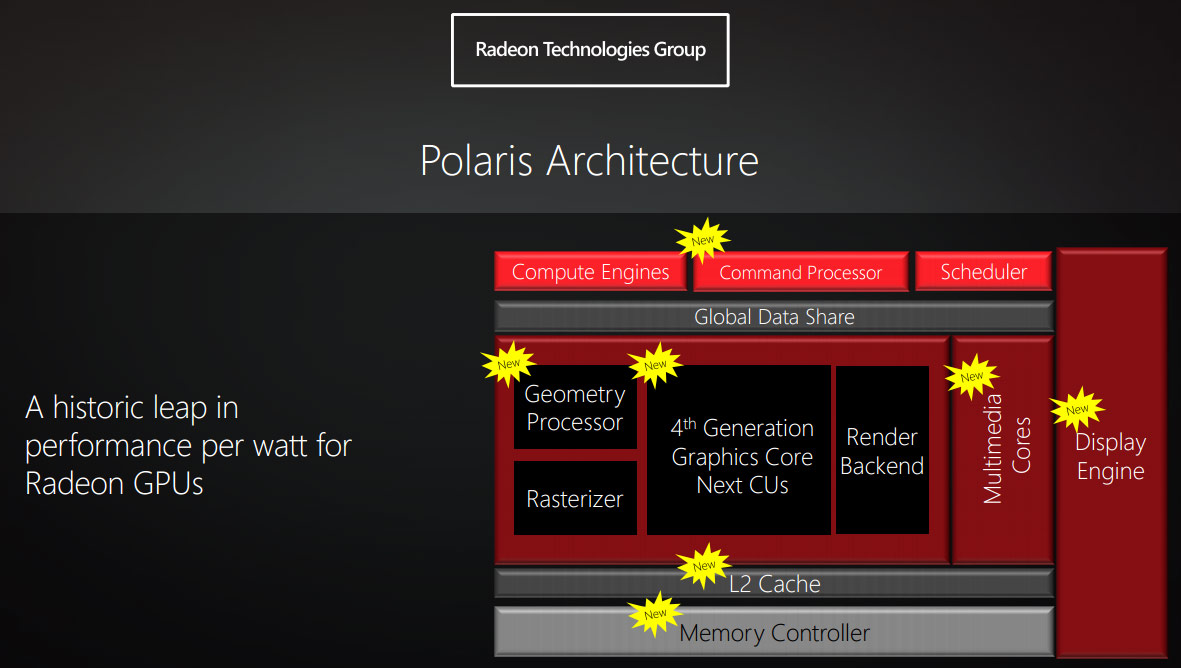 The second GPU that AMD is said to be making is "Baffin"/"Polaris 11", a smaller GPU that will have a TDP of 50w, which will allow this GPU to run on just PCI express power, meaning that it will require no external power connection. 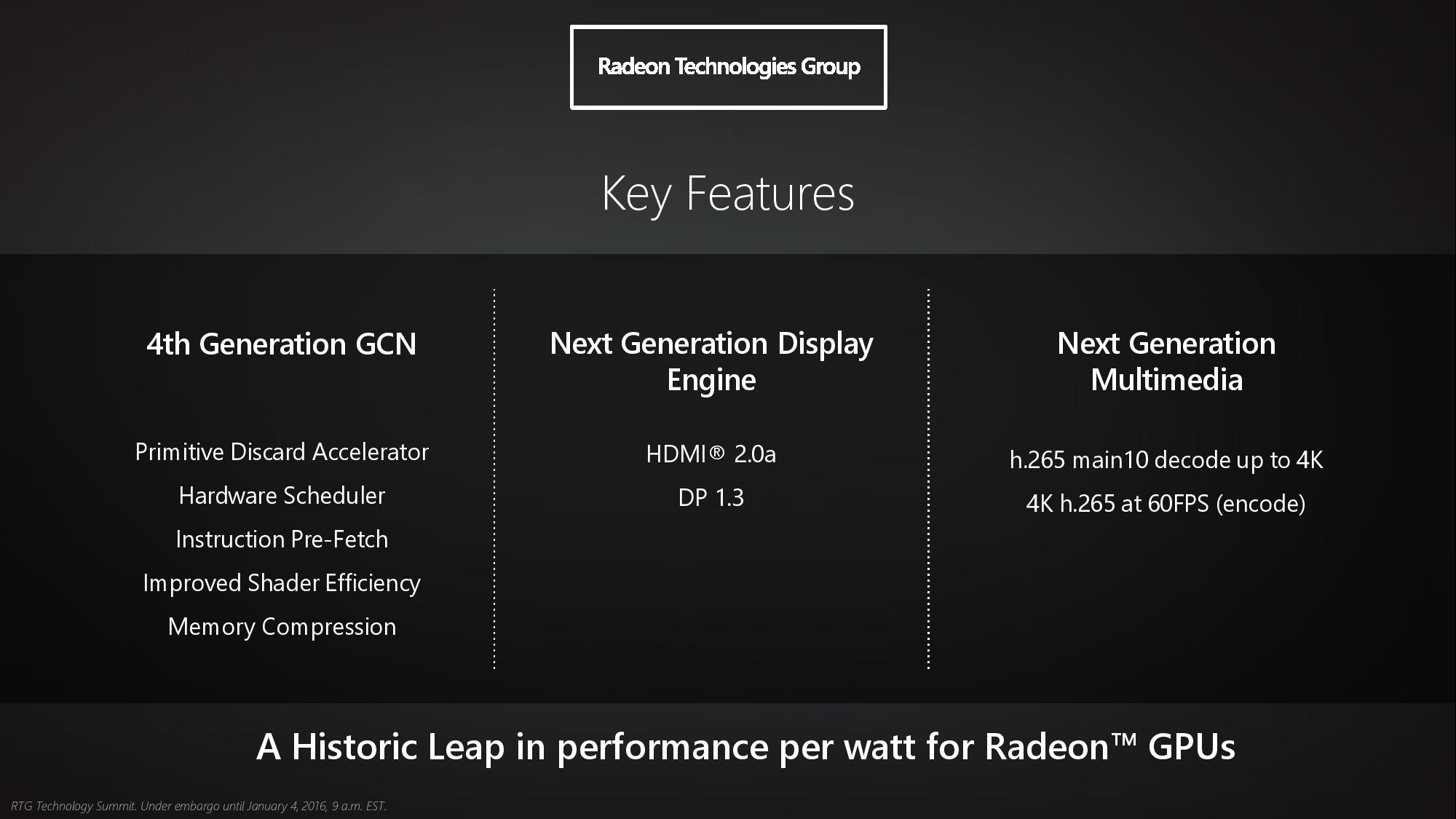 Right now these leaked specifications are fairly vague, but they do suggest that AMD has greatly increased their performance per watt.

Hopefully, AMD's Polaris GPUs will offer attractive levels of performance for their price points as right now these new GPUs don't seem to be the GTX 1080 competitor that we have been looking for.

Videocardz has claimed to have received the same information from a different industry insider, saying that these GPUs are intended for the mobile market. This means that potential desktop grade versions of these chips may be running at higher clocks and deliver slightly higher levels of performance.

You can join the discussion on AMD's Polaris 10 and Polaris 11 leaked specifications on the OC3D Forums.

Tolemac
Interesting stuff for me anyways

Fetchez La Vache
Quote:
Same, now that Octane & VrayRT are implimenting OpenCL support for their render engines 8Gb of VRAM on cheaper cards is much more interesting to me.Quote

A7ibaba
I don't understand AMD. They are collapsing on financial market,yet they talking about power efficiency of Polaris 10 and offer R9 290X performance. They must realize gamers don't care if they GPU running on 6 Pin or 2 pin. WE WANT POWER.If that require 4 - 8 PIN connectors and 500 TDP,Bring it Baby !!!!Quote

AngryGoldfish
Quote:
Polaris is reported to replace the 300 series, not the Fury series. The 300 series is the one that is suffering. A 390 draws more power than a 980ti and a 380 draws more power than a 980. That's abysmal. Raw performance isn't everything. The only pros keeping those cards on the market are the value aspects and DX12 benchmarks. If someone reads a review on a big website like TechPowerUp and sees criticism directed at the 380 for drawing more power than the substantially better 980, that does not bode well for AMD. It perpetuates the idea that their cards are not well engineered. Power efficiency is equally as important as raw power, even if it's just on paper. Not everyone is willing to look into where the 380 came from or what it signifies. They don't know Polaris is coming out to replace the 380. The Fury line is still strong. It will only start to see problems when when the 1080 and 1070 are released and readily available. The 300 series is what really needs revitalizing. Vega will revitalize the Fury line in October and beyond.Quote

Fetchez La Vache
Quote:
Given that the vast majority of cards being sold are mid to lower teir cards clearly gamers care more than just outright power. I'd suggest budget is a much bigger concern to the majority of gamers.

Unfortunately Nvidia seemed to have tapped into the inner sheep of a lot people by releasing their upper teir cards first building up an awful lot of hype with overrated Canadian DJs and Youtubers fawning over their products, then those that can't afford them just decide to buy one of their lower teir cards instead without even considering AMD because they have aleady emitionally attached themselves to Nvidia's brand.Quote
Reply