Both Sony and Microsoft are working on next-generation consoles that will support hardware accelerated raytracing and utilise Radeon graphics hardware, confirming that AMD has Raytracing hardware in the works.

Yes, AMD's upcoming RX 5700 series of Navi graphics cards won't support hardware accelerated raytracing, but given the late 2020 release dates of next-generation consoles, we can be sure that the red team will have something to show us in the near future.

A new patent from AMD has come to light which reveals a "texture processor based ray tracing acceleration method and system" which AMD has been working on, highlighting hybrid software/hardware approach to raytracing that's designed to boost graphics performance.

What's detailed is a new piece of hardware called a "fixed function ray intersection engine", specialised hardware that's designed to handle BVH intersection calculations. This hardware is added in parallel to AMD's texture filter pipeline and enables the new hardware to utilise texture cache and other features of the texture pipeline to save die space and decrease the complexity of their hybrid raytracing solution.

In effect, team Radeon's raytracing solution is designed to efficiently deal with raytracing workloads while minimising hardware complexity and die space requirements. This feature is expected to arrive with AMD's next-generation RDNA architecture.

The hybrid approach (doing fixed function acceleration for a single node of the bounded volume hierarchy (BVH) tree and using a shader unit to schedule the processing) addresses the issues with solely hardware based and/or solely software-based solutions. Flexibility is preserved since the shader unit can still control the overall calculation and can bypass the fixed function hardware where needed and still get the performance advantage of the fixed function hardware. In addition, by utilizing the texture processor infrastructure, large buffers for ray storage and BVH caching are eliminated that are typically required in a hardware raytracing solution as the existing vector general purpose register (VGPRs) and texture cache can be used in its place, which substantially saves area and complexity of the hardware solution. 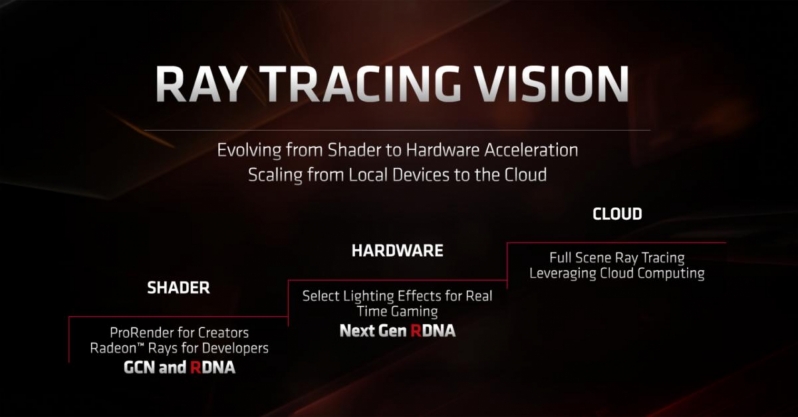 While this patent was published recently, its filing date was in December 2017, before Microsoft revealed their DXR API and before Nvidia revealed their Turing architecture, which brought the company's RT cores to mainstream graphics components.

AMD's plans to release their raytracing hardware when the time is right, which means that they plan to release when the software ecosystem is ready to push raytracing forward. While this can be seen as a less embarrassing way of saying "we don't support raytracing yet", AMD's entry into the Raytracing ecosystem will be the force which drives the feature into the mainstream, especially if both next-generation consoles support the feature.

You can join the discussion on AMD's hybrid raytracing plans on the OC3D Forums.

tgrech
The key part here that will reduce the die size/transistor count cost against NVidia's approach is that they can reuse more of the existing registers & caches, these make up a significant portion of modern processors by area and recent node shrinks have had far less impact here than on the logic side of things. They'll almost certainly still have to increase the size of the existing texture caches to be optimal for raytracing but that would benefit traditional shading techniques to a degree too and it ensures minimal dark silicon during non-hybrid rendering(You're usually looking at a 2:1 ratio at least for cache:logic with raytracing hardware).

Kleptobot
Quote:
Will be interesting to see what happens under loads that utilize the texture pipeline heavily already that might also have ray tracing now. As you mentioned they will need to increase the size of the traditional texture cache but by how much will be interesting.

I can picture people cooking up 'special' benchmarks to exploit this potential weakness to highlight perceived shortcomings of the architecture.Quote

tgrech
If you're using raytracing your world's will be stored as voxels in any practical efficient implementation so you shouldn't really be using textures for the main elements being raytraced, so by using RT you naturally decrease texture use essentially. You could concoct some really weird impractical benchmarks to trip it up but I'm not sure anyone would bother.