AMD has started to raise their game, offering purchasers of selected Radeon graphics cards free copies of three of 2018's most highly anticipated PC games, all of which will be optimised for Radeon graphics hardware.

This new bundle is titled "Raise the Game" and will grant new purchasers of RX Vega, RX 580 and RX 570 graphics cards free copies of Star Control Origins, Strange Brigade and Assassin's Creed Odyssey. These games will release on September 20th, August 28th and October 5th respectively. This bundle will be active from August 7th until November 3rd (or when AMD's supply of game codes is exhausted), with Radeon Rewards coupon codes being redeemable until December 31st 2018.

In the UK, we know that Overclockers UK, Scan, CCL Computers, PC Specialist and eBuyer will all be participating in AMD's "Raise the Game" bundle. More information is available on AMD's Terms and Conditions webpage. 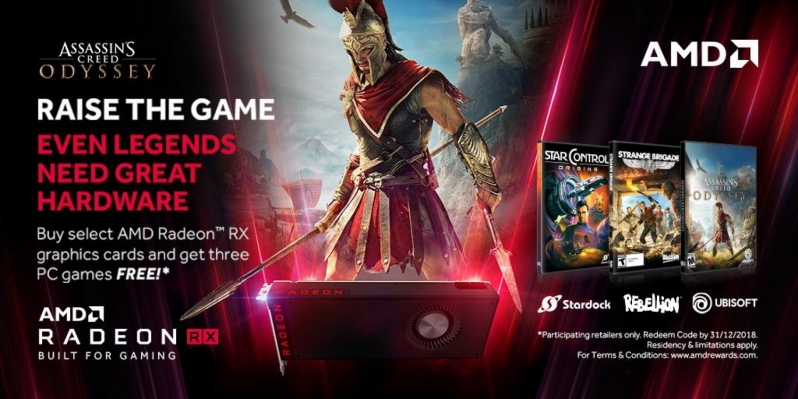 This offer confirms what we have suspected since the release of Far Cry 5, that Ubisoft is strengthening its ties with AMD, hoping to take better advantage of their latest graphics hardware, benefiting both their PC and console developments. Ubisoft has already confirmed that they are working with AMD to optimise Tom Clancy's The Division 2, though it now appears that AMD is also working with Ubisoft to streamline Assassin's Creed Odyssey's PC version.

You can join the discussion on AMD's free games offer with Radeon RX Vega, 580 and 570 series graphics cards on the OC3D Forums.