Images of a new AMD-made PCB have appeared online, showcasing what seems to be AMD's first Navi GPU offering, a reference design which will likely be used to create AMD's own Navi graphics cards as well as its workstation/enterprise variants.

For starters, this PCB confirmed that AMD plans to utilise GDDR6 memory, with the PCB having space for eight modules, suggesting that this graphics card will offer 8GB of total VRAM over a 256-bit memory bus, making this GPU similar to an RX 580, albeit with GDDR6 memory.

On the Nvidia side, their Turing-powered RTX 2070 and RTX 2080 graphics cards offer 8GB of GDDR6 memory over a 256-bit memory bus, though it is worth noting that AMD prior graphics card generations tended to get less usable bandwidth from their memory, mostly due to Nvidia's strong bandwidth saving and compression features.

In terms of power, this graphics card also ships with space for dual 8-pin power connectors, though it is worth noting that AMD doesn't need to use these mounting positions. Even so, this gives AMD's Navi GPU a maximum TDP of around 300W, assuming that they decide to use dual 8-pin power inputs. AMD could easily use an 8-pin + 6-pin power configuration, leaving the extra pins for their AIB partners to utilise.

What is also visible is a triangle of holes which seem to indicate that this PCB supports a blower-style fan, which is not necessarily a bad thing. AMD's reference PCBs are often used for workstation cards and consumer GPUs, so space for a blower fan is not a guarantee that AMD's reference gaming design will use one. 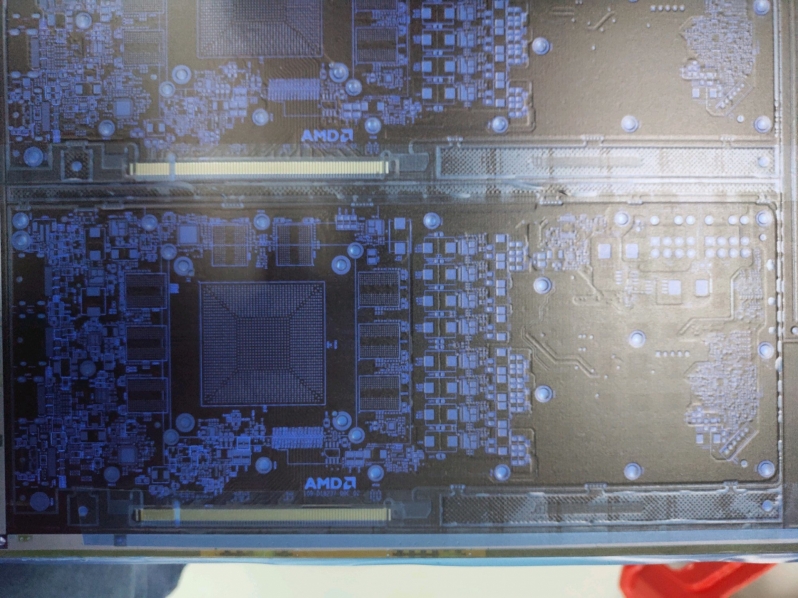 Based on this PCB there is very little that we can say about Navi's raw performance, aside from comparing the card's memory configuration to Nvidia's RTX series. This PCB does not confirm the die size of Navi, and beyond that, we have no idea of what changes have been made to AMD's graphics architecture since Vega. Navi has the potential to be a game-changer for Radeon, but the question now is what design changes have AMD made to make Navi competitive with Nvidia, and will these changes be enough to create a fully competitive graphics market.

You can join the discussion on AMD's Navi PCB leak on the OC3D Forums.

tgrech
So if this has the rumoured 12.8Gbps GDDR6 it will have exactly the same theoretical bandwidth as Vega56, if it's 14Gbps it has about 10% less than Vega64 and if it's upcoming 16Gbps it's about 10% more(15Gbps would be essentially equal).Quote

Dawelio
Quote:
That doesnt sound all that much for being a new (gen?) GPU...Quote

AlienALX
Quote:
From what I can see and have read, it's not. It's still GCN.

Apparently the completely new gen is coming after Navi. I am a little disappointed, but we will see how GCN fares going into the future. It's pretty good at DX12.Quote

Avet
Honestly i stopped being excited for AMD. Yes they nudged Intel a little bit on the CPU front, but it is more like poking a bear with a stick. On GPU front they just failed. It is new this, new that, revolutionary 7nm, and it is just more of the same. I am really hyped about Intel's GPUs. With their basically unlimited R&D budget they might be the ones who will finally bring Nvidia some trouble.

AMD will be OK, and continue to mingle at mid level hardware. They may be happy to be there, but i doubt they will release a product that would make me want it so badly that i restrain myself from beer.Quote
Reply