Does AMD have a stronger graphics card in the works?

Earlier this week, AMD showcased their first RX 6000 series graphics card, highlighting performance levels which appear to be similar to Nvidia's RTX 3080 GPU. If these results are accurate, AMD's Radeon graphics cards have finally returned to competitiveness within the high-end GPU market. That said, AMD may not show RDNA 2 at its best during this event.

As we have previously discussed, AMD has not revealed which RDNA 2 graphics card they showcased during their Ryzen event. AMD listed this graphics cards as an RX 6000 series GPU, never stating that they were testing their RDNA 2/Big Navi flagship. In a comment to PC World, AMD's Scott Herkelman also stressed that AMD never said which Radeon RX 6000 series GPU they were running.

With this in mind, it is possible that AMD wasn't showcasing their RDNA 2 gaming flagship. This move would allow AMD to surprise gamers with a higher-performance graphics card at their RDNA 2 reveal on October 28th. If this isn't AMD's plan, why could Scott Herkelman not say whether or not AMD's early benchmarks were from their RDNA 2 flagship?

In other comments, Herkelman also stated that AMD still could fine-tune their RDNA 2 graphics cards before launch, further suggesting that performance could improve.

AMD's RDNA 2 teaser already show impressive performance levels from team Radeon, though it remains to be seen whether or not RDNA 2 will become the Zen 3 of the GPU market. We will have to wait until AMD's RDNA 2 reveal on October 28th to get a full rundown on AMD's RDNA 2 architecture and products. 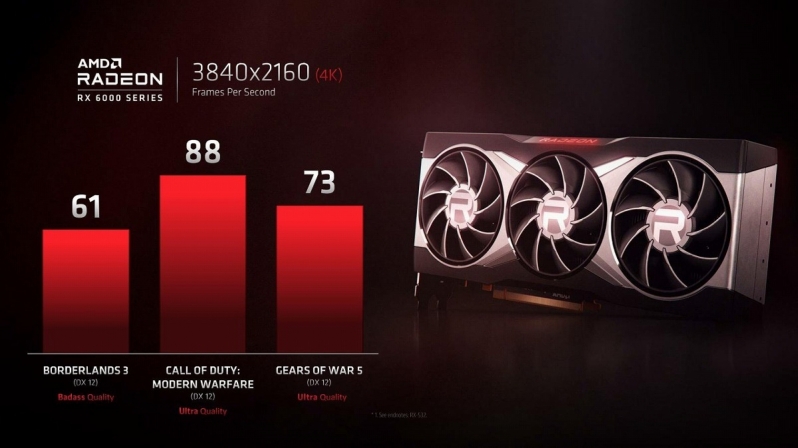 You can join the discussion on AMD's RDNA 2 teaser on the OC3D Forums.

AlienALX
It could go two ways. AMD are trolling for excellent reviews, or they are trying to prevent disappointment and stop the hype train of "Fast as a 3090" that has been going on.

What I mean is if they are sandbagging then when the reviews go live every one goes from disappointed to "OMG check it out !".

However, from plenty of experience of AMD GPU releases I would be scared to stick my neck out and assume they were indeed sandbagging. They may just be doing some damage limitation.

I hate feeling that way, but every time I have gotten excited about a new AMD GPU it's usually as bad as Nvidia's BS.Quote

Dicehunter
All companies like to cherry pick results, I'm thinking at best we'll get 3080 performance, Going by AMD's sneak peak results, But with 16GB memory.

Nvidia will then announce around February that they are releasing the 3080 Ti which will have a few hundred CUDA cores less than the 3090 and 4GB less memory with improved clocks etc...

I can see the situation being exactly like when the 780 and 290X launched, Nvidia countered with the 780 Ti.Quote

AlienALX
Quote:
You can see that all you like but the truth is Nvidia don't have more to give. The 3090 is very close to the $6000 "quadro" card now.

And let's face it, even if they had left bigger gaps in the performance here (which they clearly haven't as the 3090 is a lolcard not worth buying) then they would need better bins to pull that off. Which let's face it, we know are not happening. They can't even get enough dies out the door for what they have released, let alone start pushing out better ones.

That's why they sandbagged on VRAM dude. It's to leave that question in your head of "Is that enough?" and then they come along with ones with twice that on them and you decide it's somehow faster. Better in a way yes, but not faster.

They may have very clearly undershot the VRAM of the 3070 too, and hence they have pulled that for now. Or delayed it, right until after AMD launch.

Especially as from the sound of it both of AMD's high end cards coming out (or was it three?) are all rumoured to be carrying 16gb.Quote

AlienALX
Been thinking about this a lot.

Right now the rumour mill is alight with 80 CU (TSMC supposed leak) and 2ghz+ easy. This is based on a presentation AMD did last year and one of their guys talked about "Multi GHZ GPUs" IE multi meaning more than one. So at least two.

With the assumed spec the Navi 21 should be faster than the 3080. Not as fast, or sometimes slower.

However all of that aside?

Tell me from the past when a company has ever "bolted their load" 20 days before a launch? that is the part that makes no sense to me, unless they are just trying to up 3080 pre orders to annoy Jen.

I switched over the live stream to Not An Apple Fan (but clearly an AMD one) after the event ended. He looked absolutely gutted. So is this damage limitation? or are AMD truly playing a game here, going on the "Nobody tells you how fast their product is 20 days before the effing launch".?Quote

robbiec
Hahaha, this has put the cat amongst the chickens

AMD have been playing with leakers and influencers all year, the 150W and 10 Core Ryzen's spring to mind.Quote
Reply