Sasa Marinkovic, AMD's Senior Director of Gaming Marketing, has made fun of Nvidia on social media by subtly calling attention to their widely reported 12VHPWR cable melting issue on Twitter, calling on gamers to "stay safe" with a Radeon graphics card.

The 12VHPWR connector, which is also known as a 16-pin, 12+4-pin or PCIe 5.0 power connector, is designed to deliver up to 600 watts of power through a connector that is similar in size to a standard 8-pin PCIe power connector, a connector that is designed to deliver 150 watts of power. Many blame the overly small form factor of the 12VHPWR connection standard as the reason behind its cable melting woes, though many experts have agreed that incorrect cable insertions are what have caused cable melting issues on a minority of RTX 4090 graphics cards. 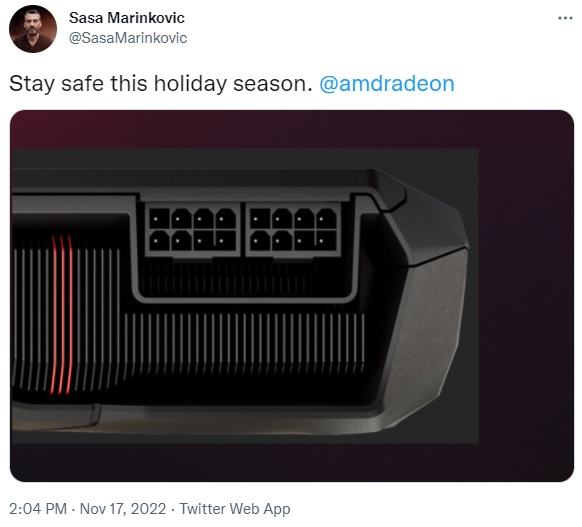 While AMD's marketing team are enjoying a laugh at Nvidia's expense, let's hope that their teams have made sure that none of their RX 7000 series graphics cards can suffer from any early issues at launch. If AMD's RX 7000 series suffers from any teething issues, it will be hugely embarrassing for the company, especially now that one of their executives have publically called attention to a problem with their rival's products.

You can join the discussion on AMD's marketing director poking fun at Nvidia's 12VHPWR woes on the OC3D Forums.

Warchild
The shade is strong!Quote