Newcomers to PC gaming will know how daunting a game's graphical options menu can be, especially when you move into the worlds of .ini tweaking and driver settings optimisations. PC offers gamers an unparalleled level of choice, but with it comes with a lot of extra complexity, which is something that AMD/Radeon wants to address with their new "Radeon Advisors" system.

AMD's Radeon Advisors are designed to help PC gamers get the best performance out of their systems, helping gamers to tweak their game settings for additional performance, Radeon Settings to ensure the best experience by informing users about options like FreeSync and Enhanced Sync if their systems are compatible. The Upgrade Advisor also suggests potential upgrade options when your PC is ready for some new hardware.

Using AMD's Radeon overlay, you can conduct a quick framerate test in a game and AMD's Radeon settings will help players maximise their framerate by suggesting graphical effects to turn down or disable. While this does not adjust a game's setting automatically like Nvidia's Geforce Experience software, the tool will no doubt prove useful to newcomers to the PC gaming ecosystem. 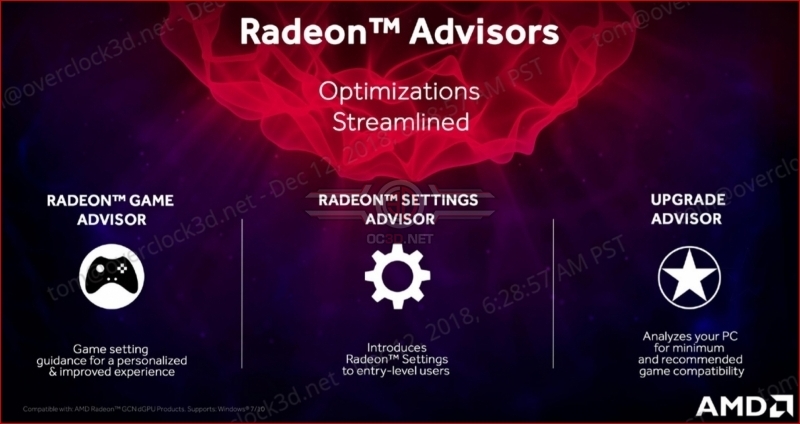 AMD's Radeon settings advisor also makes it easier to enabled options like FreeSync, HDR, VSR, Radeon Chill and Enhanced Sync than ever before, allowing each setting to be enabled using a single click while informing users whether or not they are using AMD's latest graphics drivers.

The upgrade advisor is perhaps the strangest new entry into AMD's Radeon Software toolset, allowing PC gamers to select several titles and get AMD's Radeon Software to recommend hardware upgrades, though the usefulness of this tool will no doubt be limited. I don't see AMD recommending Intel or Geforce hardware using this tool, making the expertise of the users of hardware forums or reviewers a more useful to most end users. That said, AMD's hardware advisor is could be a great starting point when considering a system upgrade.