Nvidia's hosting their "Geforce Beyond" Special Broadcast tomorrow, an event where Nvidia's expected to reveal their RTX 40 series of graphics cards. These next-generation GPUs are due to feature a new architecture, and make use of a cutting-edge lithography node, enabling what's likely to be a colossal performance boost for gamers.

With their latest statements, AMD's claiming that their next-generation GPUs should be a lot more power efficient than Nvidia's RTX 40 series designs. AMD has stated that their new designs will feature a "new generation of AMD Infinity Cache" that offers users "even higher-density, lower-power caches", and a refined adaptive power management system that will ensure that RDNA 3 GPUs only uses the power it requires to maximise its performance.

Below is what AMD had to say about their RNDA 3 graphics architecture.

Looking ahead, we’re continuing our push for more efficient gaming with AMD RDNA 3 architecture. As the first AMD graphics architecture to leverage the 5nm process and our chiplet packaging technology, AMD RDNA™ 3 is on track to deliver an estimated >50 percent better performance per watt than AMD RDNA™ 2 architecture – truly bringing top-of-the-line gaming performance to gamers in cool, quiet, and energy-conscious designs.

Contributing to this energy-conscious design, AMD RDNA™ 3 refines the AMD RDNA™ 2 adaptive power management technology to set workload-specific operating points, ensuring each component of the GPU uses only the power it requires for optimal performance. The new architecture also introduces a new generation of AMD Infinity Cache™, projected to offer even higher-density, lower-power caches to reduce the power needs of graphics memory, helping to cement AMD RDNA™ 3 and Radeon™ graphics as a true leader in efficiency.

We’re thrilled with the improvements we’re making with AMD RDNA™ 3 and its predecessors, and we believe there’s even more to be pulled from our architectures and advanced process technologies, delivering unmatched performance per watt across the stack as we continue our push for better gaming. 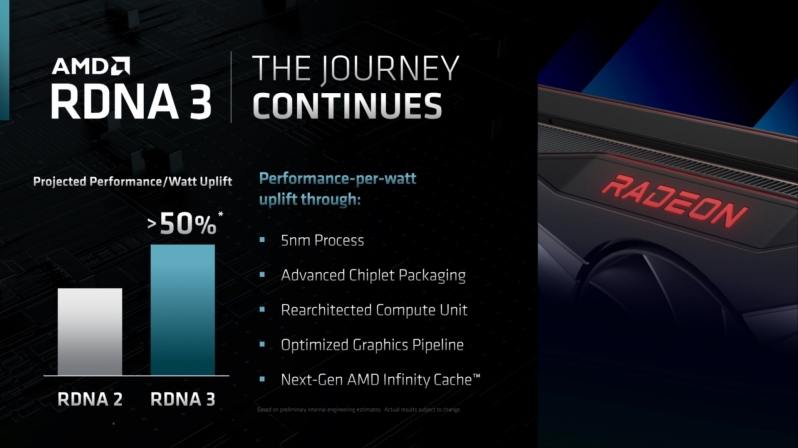 If AMD's RDNA 3 architecture is more power efficient than Nvidia's RTX 40 series. AMD's high-end graphics cards could be cooler running and quieter than their Nvidia counterparts. This is great news for AMD, though it remains to be seen if Nvidia's RTX 40 series will be as power hungry as expected.

You can join the discussion on AMD's RDNA 3 power efficiency claims on the OC3D Forums.

NeverBackDown
And still the top tier cards will pull more power than ever.Quote

AngryGoldfish
Quote:
It could be like that just to compete though. The RX 580 was a hot beast because AMD were overclocking it to stay competitive. If you notched it back a little it was great. When you're at the top-end of gaming GPU's, in my opinion I'd rather throttle the card manually to find the sweet spot of performance-per-watt. Allowing AMD or AIB's to do it means they'll favour whatever is marketable, not what's actually best for the GPU or for every user.Quote
Reply