AMD has two Polaris GPUs coming this year, promising to deliver the most power efficient and powerful GPUs that the Radeon Technologies group has ever delivered, using their new GCN 4.0 architecture and then new Globalfoundries 14nm FinFET manufacturing process.

Our guiding principle for the Polaris architecture was power efficiency. We have the new naming scheme for our architectures. It’ll be based on galaxies, star systems, and stars. You’ll see more of this coming in the future. Polaris is the beginning of our journey through space.

When AMD say two GPUs they mean two new pieces of silicon, which will be binned and used to create several Polaris GPU models. This will mean that AMD will be releasing much more than two mere GPUs in the year of 2016. Given recent trends each GPU is expected to be used for between 2-3 GPU models, with an extra Dual GPU core part for the high end, making the expects GPU count from AMD being between 5 and 7 for AMD, provided that these trends hold true.

Moving forward AMD already expects that they can continue to make large strides in performance, expecting to be able to create GPUs that are at least 20% more powerful for the same cost and power consumption, hoping to make some some major improvements to both performance and efficiency.

When we set to design this GPU, we set a completely different goal than for the usual way the PC       road maps go. Those are driven by, the benchmark score this year is X. Next year we need to target 20 percent better at this cost and this power. We decided to do something exciting with this GPU. Let’s spike it so we can accomplish something we hadn’t accomplished before. 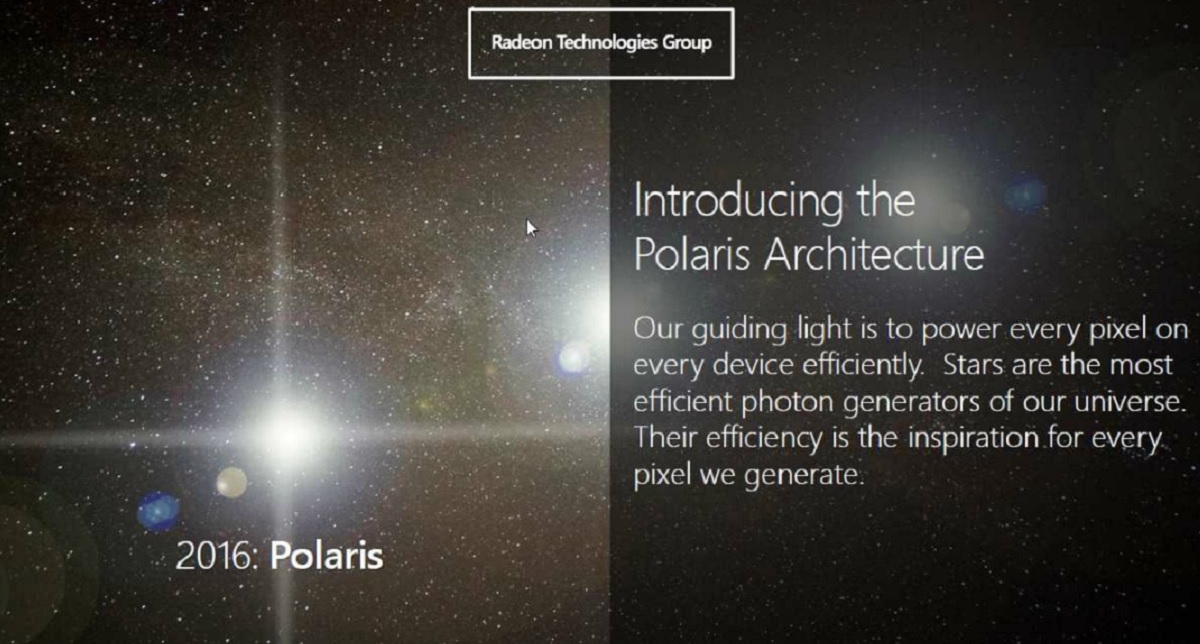 AMD has changed a lot in their GCN architecture since Hawaii, redesigning almost every aspect of the GPU in order to create a GPU that is ready for modern workloads, providing HDMI 2.0 support, 4K encode/decode support and a "revolutionary" increase in GPU performance.

Yes. We have two versions of these FinFET GPUs. Both are extremely power efficient. This is Polaris 10 and that’s Polaris 11. In terms of what we’ve done at the high level, it’s our most revolutionary jump in performance so far. We’ve redesigned many blocks in our cores. We’ve redesigned the main processor, a new geometry processor, a completely new fourth-generation Graphics Core Next with a very high increase in performance. We have new multimedia cores, a new display engine.

This is very early silicon, by the way. We have much more performance optimization to do in the coming months. But even in this early silicon, we’re seeing numbers versus the best class on the competition running at a heavy workload, like Star Wars—The competing system consumes 140 watts. This is 86 watts. We believe we’re several months ahead of this transition, especially for the notebook and the mainstream market. The competition is talking about chips for cars and stuff, but not the mainstream market.

In summary, it’s fourth generation Graphics Core Next. HDMI 2.0. It supports all the new 4K displays and TVs coming out with just plug and play. It supports display core 4.3, the latest specification. It’s very exciting 4K support. We can do HEVC encode and decode at 4K on this chip. It’ll be great for game streaming at high resolution, which gamers absolutely love. It takes no cycles away from games. You can record gameplay and still have an awesome frame rate. It’ll be available in mid-2016.

If there is one thing that AMD say that Fiji will be it is Efficient, but not all of that is coming from the new 14nm FinFET manufacturing process that they are using, but from a lot of architecture changes from GCN 4.0, AKA Polaris.

Staff from the Radeon Technology Group did admit that the bulk of the efficiency improvements that we will see with AMD's newest GPUs will come from the so-called "FinFET Advantage", with PCPER stating that is is "on the order of a 70/30 split". 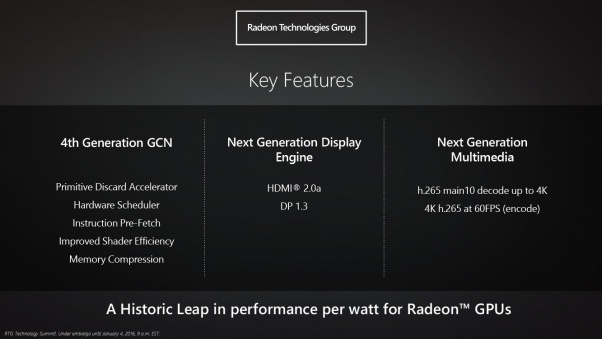 In terms of architecture improvements the new Polaris, GCN 4.0, architecture will feature a newly designed command processor, a dedicated multimedia section, a new display engine, updated geometry processors and a updated memory controller and new and improved set of L2 cache, all of which will be instrumental in giving AMD more performance in this upcoming generation of GPUs.

The new command processor will likely help AMD with Asynchronous and serial computing tasks, especially with the new DirectX 12 API, promising that the GPU will never be sitting at idle for too long and the new memory controller will no doubt help AMD make the most out of every bit of available memory bandwidth that they can get their hands on with HBM 2.0, though we do still expect to see some GDDR5 or GDDR5X in the lover end of AMD's lineup.

AMD has also stated that they have "uplifted the frequency of the product", meaning that AMD's upcoming GPUs will be able to run at higher frequencies than before, so perhaps this will mean that AMD will enter an overclocking golden age or simply just have much better clock speeds out of the box. Perhaps 1250MHz or more on the GPU core. 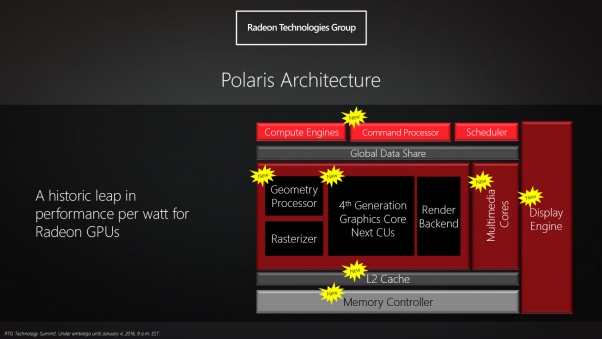 With such a large reduction in power consumption at the same level of GPU power AMD will see a drastic improvement in their performance per watt, especially for their mobile products.

Remember that this was talking about FinFETs alone, so hopefully AMD's architectural improvements will allow AMD to deliver an even greater increase in GPU performance. 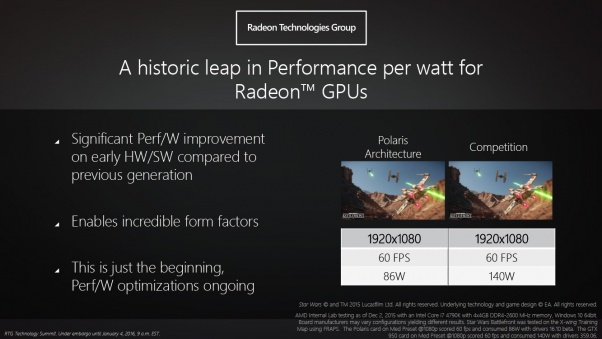 AMD may be releasing their first Polaris GPU is just two months, finally delivering a new low power offering to the lower end market. Hopefully AMD's new products will continue to look this impressive and that AMD will not just deliver some great performing products, but new products that can also be able to compete with Nvidia's upcoming Pascal series of GPUs.

You can join the discussion on AMD's Polaris GPUs on the OC3D Forums.

AMD has two Polaris GPUs coming this year and promises a 20% improvement for 2017. https://t.co/szkHLqfiDV pic.twitter.com/gWa0RX2gyi

NeverBackDown
Super excited for all the new next gen GPUs. I think AMD will make the most progress in notebook class GPUs which should really help them gain some revenue since nearly everything in that market is Nvidia onlyQuote

barnsley
Quote:
Hopefully they'll fix the drivers first though. They're pretty shocking in my experience. Nowhere near as good as the desktop drivers.Quote

NeverBackDown
Quote:
I've had the same experience with Nvidia but that was years ago so I couldn't definitely say they still suck now. The rate AMD are going with there drivers because of Koduri I have hope he can turn it aroundQuote

barnsley
Quote:
IMO the current state of affairs with AMD (dedicated) mobile GPUs are a joke. The apus seem to be fine for the most part.

nVidia win hands down with the mobile market. If AMD pull through its unlikely that they can become top as nVidia never seem to rest easy with mobile gpus.Quote

Kushiro
I've got a Clevo P150EM with a 7970m and whilist it isnt problem free, it isnt exactly a massive problem either.

Though I agree I have much less problems with my 980m sli notebook.Quote
Reply