After AMD's Next Horizon event, many Radeon fans were disappointed at the lack of detail in their future GPU product roadmap, with no mention of AMD's future architectures like Navi or the company's "Next-Gen" hardware designs.

Thankfully, AMD has cleared things up a little after the event, releasing their "Roadmap to a Datacenter Future" (via Computerbase), which states that their Radeon Instinct "MI-Next" will release in 2020. At this time, AMD's Navi architecture is expected to act as a consumer-grade replacement for Polaris, not Vega, making it a mid-range offering, making it possible that "MI-Next" is a post-Navi GPU or part of a later high-end Navi GPU release.

With "MI-Next" AMD plans to offer increased performance better software compatibility and what the company calls "Increased connectivity", though at this time it is unknown what Radeon means here. Is AMD expanding the capabilities of their Infinity Fabric Link GPU interconnects? 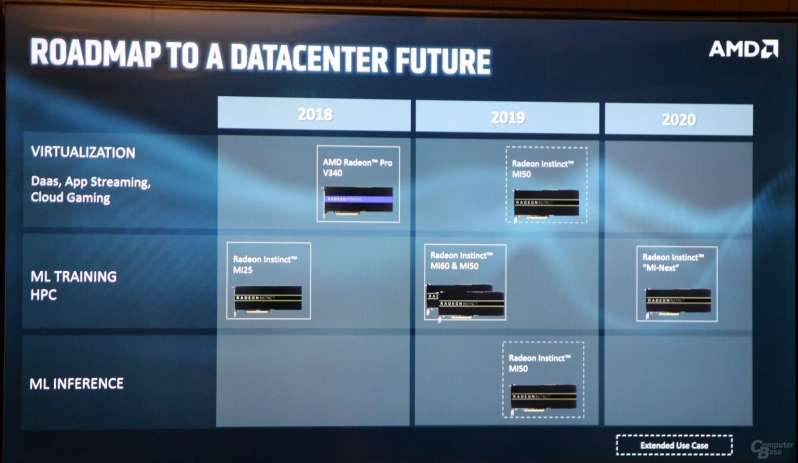 What AMD's Radeon roadmap shows us is that the Datacenter market is important for AMD's future, with their high-margin products offering the company a great opportunity to earn money and plenty of space to expand their market share. If successful, AMD will have more money to invest in R&D, which in turn will result in better products in both the datacenter and consumer markets.

While some gamers will be disappointed in Radeon's apparent focus on AI, it is worth remembering that Nvidia has bought AI performance into the gaming market with Turing though their Tensor cores and that Microsoft is working on an API called DirectML which will make AI performance more accessible to game developers. There is no doubt that AI performance will become a critical factor within the gaming market, especially as more technologies like Nvidia DLSS (Deep Learning Super Sampling) are developed. AMD's investment in AI will pay off for gamers, even if it takes a while to materialise.

You can join the discussion on AMD's Radeon Instinct GPU Roadmap on the OC3D Forums.