So what is the Radeon Pro Vega II? That's a purpose-built Radeon graphics card that AMD will ship in Apple's latest Mac Pro offering users the full Vega 20 experience with 1TB/s of memory bandwidth and access to the graphics cards full assortment of 4096 stream processors, making each graphics card more powerful than the AMD Radeon VII.

Better still is the fact that Apple is offering their users two Radeon Pro Vega II graphics cards on a single PCB with a solution called the Radeon Vega II duo, providing their users with the power of a multi-GPU system which uses Infinity Fabric Link for fast inter-GPU communications. This graphics card also features four Thunderbolt 3 display outputs and one HDMI 2.0 connection.

Below are the specifications of AMD's Radeon Pro Vega II graphics cards.

One interesting aspect of the Radeon Pro Vega II lineup is how they are powered on Apple's Mac Pro, as it utilises an "all-new PCIe connector" for power, rather than standard 6-pin or 8-pin PCIe power cables. While this will make the Radeon Pro Vega II easier to install, it also comes as a clear method which will prevent users from upgrading their Mac Pro systems without Mac-specific hardware. No consumer graphics cards use this "all-new PCIe power connector", which means that only Apple-certified hardware will run on the new Mac Pro. Apple calls this new power solution an MPX module. 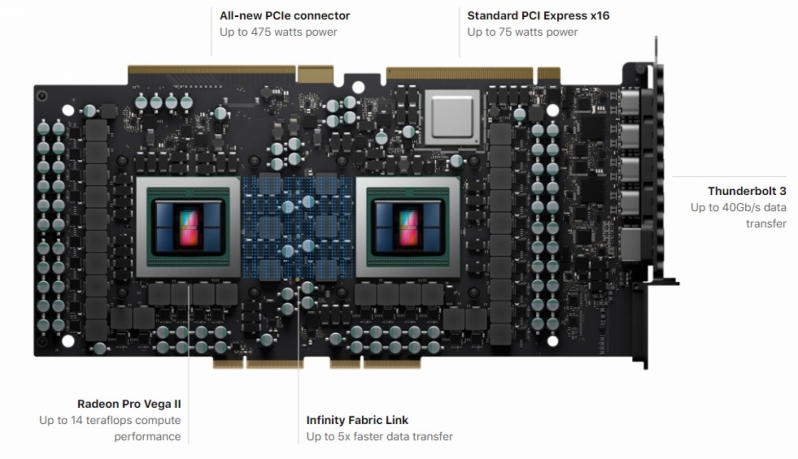 With Apple's basic Mac Pro system offering a mere Radeon Pro 580X, a modified version of AMD's RX 580, it is likely that Apple's Radeon Pro Vega II Mac Pro systems will ship with a hefty price premium, with the basic edition f the Mac Pro shipping for $5,999 this fall.  Yes, $5,999 doesn't even get you a Vega graphics card. Just look at the price of a Radeon RX 580 graphics card today and judge for yourself if that price is justified...

Regardless, Apple use of Radeon graphics tech is no doubt good news for AMD, as it will secure for them additional graphics sales, albeit in relatively low volumes, and get more developers working on their tech. The question today is how many people will buy the Vega II powered Mac Pro, as it is likely to cost upwards of $10,000 when combined with a stronger processor than Apple's 8-core base model.

You can join the discussion on AMD's Radeon Pro Vega II and Pro Vega Duo graphics cards on the OC3D Forums.

Still a shame AMD didn't make the Radeon 7 with all 4096 SP instead of the 3840 it shipped with.Quote

WYP
Quote:
AMD basically used a pre-existing SKU to make the Radeon VII. Going for the full core count would mean that they would either offer users 32GB of VRAM or need to make a new SKU with all the cores enabled and 16GB of HBM2.Quote

demonking
a nice stand for it will only set you back $999 dollars.....
I don't know who in their right mind buys a Mac these days, are they really that much more productive these days when you bring price vs performance?Quote

Giggyolly
Quote:
I thinks it's more to do with people having invested their time to use Mac only software, and don't want to re-learn something else.

I also don't think the PCs are too overpriced, comparisons of the IMac vs self built showed it's fairly reasonable given the parts. But that $1000 stand.. damn!Quote

demonking
Quote:
That and snobbery I think are what are keeping these going.
I would love to a comparison of software that runs on both when spending the same on hardware. Like if you bought one of the base models ($5000!!!!) and then spent $5000 on a windows PC and see what the difference actually is though I doubt Apple will be sponsoring anything like that anytime soon haha.Quote
Reply