In the company's latest investor presentation, AMD has once again hinted at it's improved RDNA 2 graphics architecture, reconfirming that it will offer a 50% boost to performance/watt over their original RDNA architecture as well as enhanced clock speeds, and more performance per clock.

Thanks to RDNA 2's architectural innovations, AMD has been able to deliver Improved Performance-per-Clock (IPC), which means that AMD's latest graphics architecture will be able to do more graphics work during each of its clock cycles. On top of that, AMD also promises an increase in clock speeds, giving AMD two methods of performance enhancement with RDNA 2.

Sony's PlayStation 5 console already promised GPU clock speeds as high as 2.23GHz, which are well in excess of what any of AMD's original RDNA graphics cards. This reveal had already semi-confirmed that RDNA 2 would deliver higher clock speeds to Radeon customers, though it is encouraging to hear the same thing from AMD.

Higher clock speeds will allow AMD to get more performance out of every stream processor within its RDNA 2 architecture, a factor which is great news for AMD as a whole. When combined with RDNA 2's enhancements in power efficiency, AMD's next-generation graphics cards have a genuine chance of being performance leaders when they release later this year. That's something that hadn't been the case for team Radeon for quite some time.

AMD's RDNA 2 architecture also delivers more features to the red team's graphics cards, such as DXR compliant hardware-accelerated raytracing, Variable Rate Shading (VRS) and Mesh Shader support. These features will underpin Microsoft's next generation of console hardware, making these features very valuable to gamers who want their next-generation graphics cards to last them for a while. 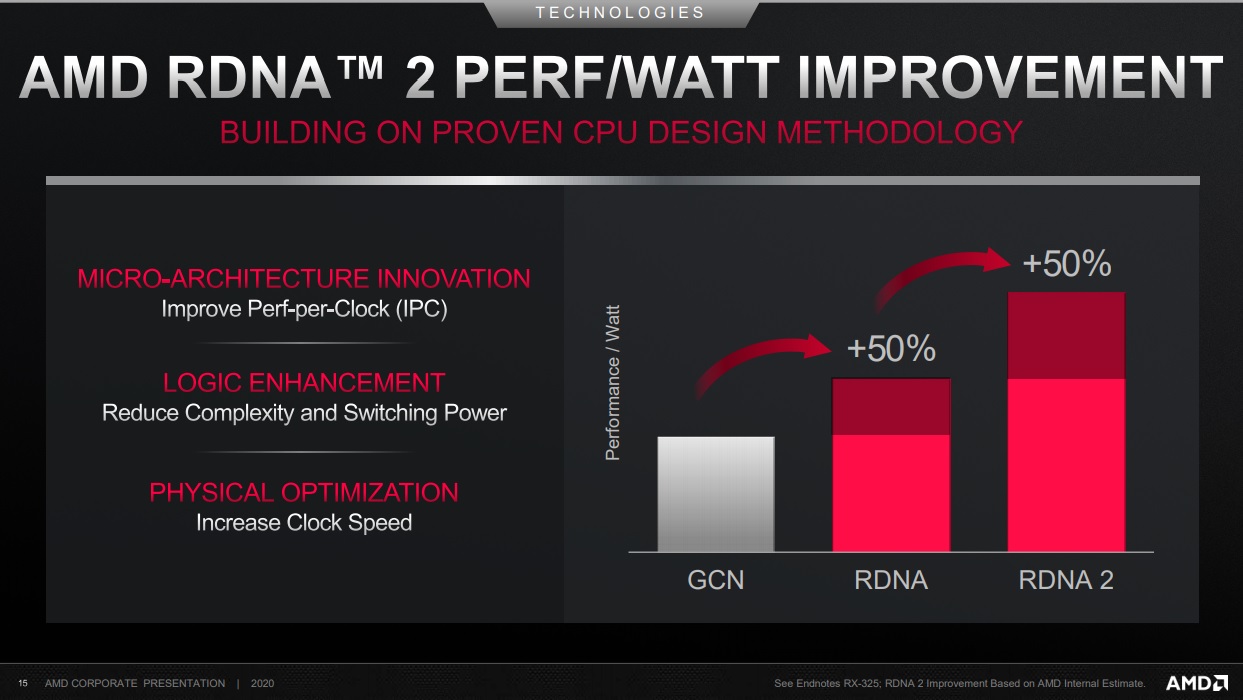 You can join the discussion on AMD's next-generation RDNA 2 graphics architecture on the OC3D Forums.

AngryGoldfish
From all the rumours so far, it's looking like RDNA2 is going to be the first genuinely competitive high-end range from AMD in a while. It was even rumoured that Nvidia have replaced the original GA104 chip with the GA102-200 chip in the RTX 3080 to be more competitive. Obviously scepticism is pretty much a necessity with Radeon, but if Nvidia are preparing for something other than a washout from AMD, that could mean good things for consumers.Quote

tgrech
Quote:
Tbh NVidia should call it the 3080 anyway so they don't have to use that Super marketing again when they inevitably refresh it/release a fully unlocked version.Quote

NeverBackDown
Link goes to the image not the article on my end at least.

RDNA 2 seems like a huge step up if 50% is still being believed on the same node. That would imply Ryzen is being so successful that the R&D paid off wonders for the GPU team if they were able to get this. Just imagine if they had that money 5 years agoQuote

Warchild
Quote:
Well if this slideshow is official and from AMD, they have to provide 50% as stated otherwise its a PR nightmare and lawsuit waiting to happen should users purchase a product with lacking results.Quote

tgrech
Quote:
Additional perf per watt gains would be easy to "cheat" tbf, they just need one low end SKU that comes kinda under clocked if the arch can't do it already.Quote
Reply