RDNA 2 is the architecture that power next-generation gaming

In case you aren't aware, AMD is the company behind both the Xbox Series X and PlayStation 5, at least on the hardware side. The Zen 2 and RDNA 2 CPU/GPU architectures underpin both console platforms, making AMD the GPU company to watch as 2020 progresses.

With Microsoft's next-generation console using AMD hardware, it makes sense that the next generation of DirectX 12 has been created with Radeon hardware in mind. DirectX 12 Ultimate is the standard that defines the next generation of gaming on Xbox Series X and PC, and Radeon's RDNA 2 architecture supports all of the standard's full feature set. This means that AMD's next-generation graphics cards are going to deliver some major feature upgrades.

AMD has already confirmed that RDNA 2 is going to deliver a massive 50% improvement in power efficiency over RDNA, a feat which highlights how much AMD has improved their graphics technology in the run-up to the next console generation. Add on DirectX 12 Ultimate support, and AMD's onto a winner.

Below is a demo video for AMD's RDNA 2 DirectX Raytracing technology.

What Does DirectX 12 Ultimate Include?

DirectX 12 Ultimate is a feature set, a standard which removes the fragmentation of the DirectX 12 ecosystem. Now, both developers and gamers will know that DirectX 12 Ultimate ready graphics cards will be ready for next-generation games and graphical features, which is good news for all parties involved.

VRS is a feature which can be used to lower GPU load intelligently, enabling increased framerates by allowing developers to dedicate high precision rendering to where it is necessary. 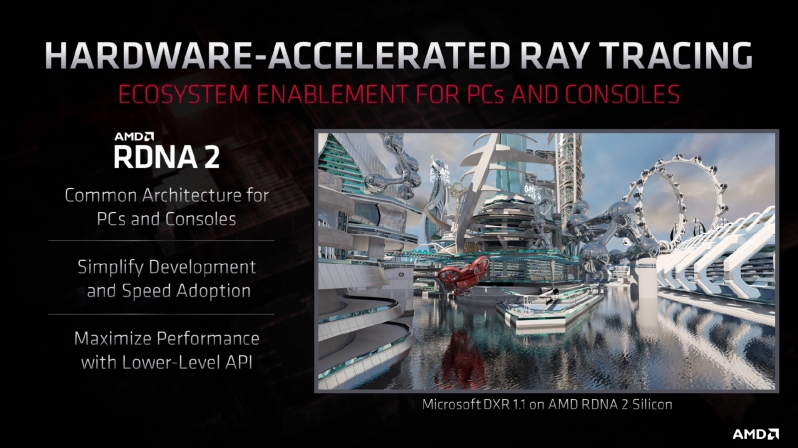 DirectX Ultimate brings Xbox Series X and PC together with a combined feature set, allowing developers to adopt the standards of next-generation systems across PC and Xbox at a record pace.

RDNA 2 is going to be a revolutionary architecture for AMD, offering a large generational performance leap over RDNA 1 and new features which will guarantee a long lifespan for the hardware.

What features of RDNA 2 are you most excited to see? You can join the discussion on AMD's RDNA 2 architecture on the OC3D Forums.