AMD claims that "Big Navi" will be their "halo product"

Does this mean that RDNA 2 will come to PC before consoles?

AMD claims that "Big Navi" will be their "halo product"

At the Bank of America 2020 Securities Global Technology Conference, AMD's Devinder Kumar, the company's Chief Financial Officer, has confirmed that Navi 2 will be AMD's "first RDNA 2 base product". This statement suggests that their RDNA 2 architecture will arrive on PC before it becomes available on next-generation consoles.

Both the PlayStation 4 and Xbox Series X are due to release within the "Holiday 2020" timeframe, which means that PC gamers should expect to see RDNA 2 before November 2020.

AMD's RDNA 2 architecture promises an incredible 50% boost in performance/watt over today's RDNA-based products, highlighting the efficiency advantage offered by AMD's next-generation Radeon architecture. These gains are possible on a 7nm node, which means that AMD has achieved these gains without a major process node shift, making these efficiency gains all the more incredible.

In another statement, Kumar revealed that "the RDNA 2 architecture goes through the entire stack", saying that  "it will go from mainstream GPUs all the way up to the enthusiasts and then the architecture also goes into the game console products, ... as well as our integrated APU products." That's right, RDNA 2 is coming to AMD's entire product stack, and that will include APUs (AMD CPUs with integrated graphics), and that's a big deal for AMD's future mobile processors. 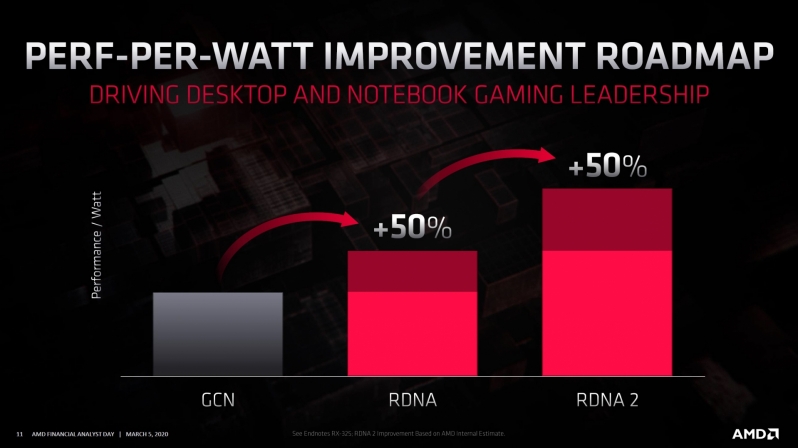 We see this area as a tremendous growth opportunity for both gaming and data center GPUs over the next five years, and the bifurcation of our roadmap will allow us to optimise for the workload and for the used cases that we see so that we can grow revenue in the GPU space."

The slide below highlights AMD's beautification of its graphics architectures, with gaming and datacenter graphics hardware requiring different feature and unique optimisations. This could be part of the reason why RDNA 2 is so power-efficient, as AMD has the freedom to cut away any unnecessary fat from their gaming-focused designs. In a similar way, CDNA will cut away any unnecessary gaming-focused features from AMD's compute-focused lineup, resulting in its own set of efficiency gains.

AMD is on track to release RDNA 2 series graphics cards in 2020 alongside new Zen 3 series products. AMD has called "Big Navi" a "Halo Product", stating that "enthusiasts love to buy the best and we are certainly working on giving them the best." 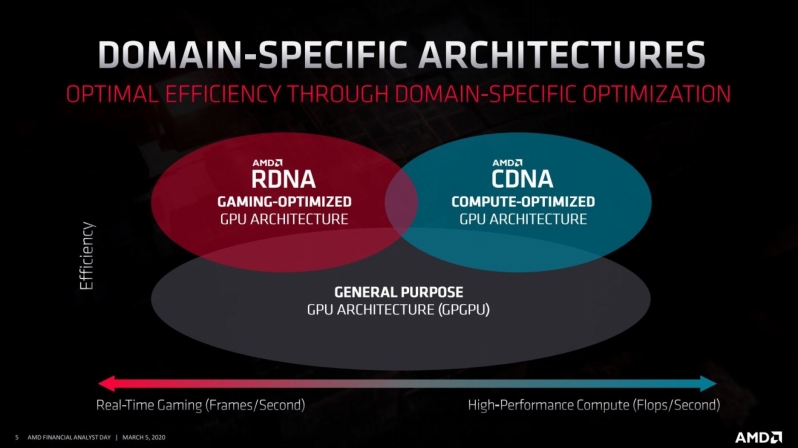 Rumour has its that both AMD and Nvidia have plans to release new graphics cards as soon as September 2020, something which will completely shake up the PC gaming market, especially as the launch of next-generation consoles approaches.

These next-generation hardware launches will likely cause a significant change to CPU pricing, as both manufacturers work to compete with each other and with both the PlayStation 5 and Xbox Series X in the gaming space. PC gamers are expected to get a lot more performance from their graphics cards purchases in late 2020.

You can join the discussion on AMD's claims that  "Big Navi" is a "Halo product" on the OC3D Forums.

NeverBackDown
I am still skeptical about 50% perf/watt gains on the same 7nm node, but if true would be very impressive.

Also interesting to see the difference between Nvidia and AMD. Nvidia with its vastly superior budget is able to use one architecture for both gaming/HPC, etc, and dominate easily in both markets. Whereas the smaller budget of AMD requires two architectures.


I will say it is about time though that APUs finally move on from Vega. APUs will get very large perf/watt gains from that which only makes them even better than Intel which they already are anyways for mobile.Quote

WYP
Quote:
Nvidia also does this in some regards. The Ampere A100 features none of the "gaming stuff" (RT cores etc etc) that gaming cards will feature. Nvidia will be using the same architecture elsewhere, but the optimisation and orientation will be very different.

I agree with RDNA 2 on APUs. It will be a big change, especially when it comes to memory bandwidth efficiency. RDNA 1 gets a lot more from its memory bandwidth than Vega ever did. That said, Vega in the Ryzen 4000 series APUs back big perf/watt improvements that weren't seen elsewhere and weren't due to 7nm.Quote

yeeeeman
Quote:
Big part of that is fixing power related bugs in rdna1...for a 7nm card, the 5700xt eats A LOT of power, a tad more than even 12nm gpus from nvidia, which is very very bad. So the 50% improvement is just fixing a big problem and advertising it as a big improvement. Just like they advertised 50% higher IPC for Zen vs Buldozer. The biggest leap ever in IPC. Sure, when you go from a piece of crap to something half decent, the improvement is huge, but it doesn't mean you did some engineering marvel to make it happen. You just fixed your own crap.Quote

grec
Quote:
There's no bugs(As you can tell from how well these archs and recent TSMC nodes always work in power restricted environments like APUs), they just clock them closer to their limits on the desktop models, power/heat increases at an x^2 rate with voltage. They couldn't match NVidia on IPC because of their limited budget, so they just squeezed everything they practically could out of the silicon they could produce on their then miniscule budgets. Of course, now the money has been flowing in from Ryzen for a few years, following architectures have been having healthier R&D budgets.Quote

Typo. It's the Playstation 5 that's coming out, not 4.


Quote:
Yeah, this has been something AMD has had to do a few times now. In order to stay competitive, they've had to crank the clock speeds past the point of ideal efficiency. If they've remedied that with RDNA2, or improved it at least, that's excellent. I mean, that's partly why WattMan exists, and why undervolting their GPUs is so profitable.Quote
Reply