AMD changes the official specifications of their RX 560

AMD changes the official specifications of their RX 560

AMD launched their RX 560 earlier this year, delivering the same Polaris architecture as AMD's older RX 460 but with 128 more GCN 4.0 GPU cores and higher base and boost clocks speeds.

These improved specifications made the RX 560 a much more compelling offering for budget PC gamers, though now it looks like AMD has downgraded the specifications of this new GPU model. AMD has edited the official specs of this GPU to allow models with either 896 or 1,024 to be used, allowing weaker GPUs to sell under the RX 560 banner.

This move is horrible for the consumer, as it was done without an official announcement to the press or consumers, allowing weaker graphics cards to sell with no visible changes to their RX 560 branding. Earlier in the year, these weaker RX 560 series GPUs have been sold with the RX560D name in the Chinese market, with these GPUs now being sold without any visible changes for consumers to notice.

Below are images which showcase AMD's specification changes between May and December of this year, effectively allowing weaker "RX 460 rebrands" to be marketed as RX 560 GPUs. 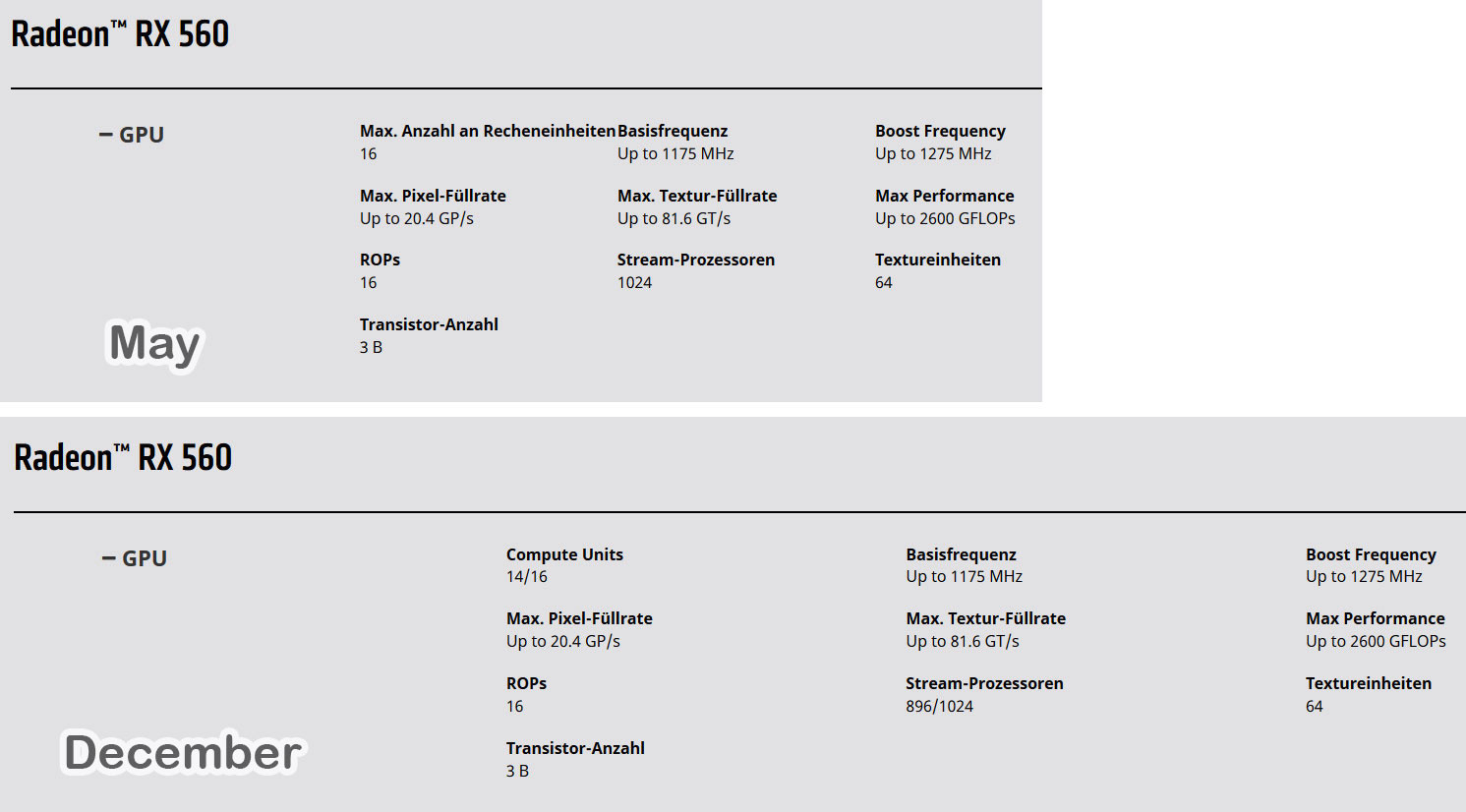 Sapphire Technology already sells a variant of their RX 560 Pulse 4GB that comes with these weaker specifications, with the only difference between 896 and 1,024 models being a change in model number. This leaves consumers in a position where they can be sold a weaker product than previously advertised, leaving room for a potential "bait and switch" lawsuit.

While some will say that Nvidia has done the same thing with their GTX 1060 3GB GPUs, which offer a lower CUDA core count than GTX 1060 6GB GPUs, the difference is that Nvidia clearly advertised this change in specifications. AMD has done no such thing here, creating a messy situation.

You can join the discussion on AMD changing the RX 560's specifications on the OC3D Forums.

looz
Slimy, though I suppose not many people will end up with these due to the artificially high RX prices. 1050 Ti is not much more and stomps the 560.Quote

NeverBackDown
Quote:
570 isn't much more and stomps the 1050ti.
It's a never ending cycle.Quote

looz
Mainly the point is that RX 560 sits in an awkward spot regardless.Quote

NeverBackDown
Quote:
So does the 570 with the 580. Never ending cycle!
The cycle got worse with the 1070ti now too. Technology never stops.Quote
Reply